This post is the first in a series of play reports about an ongoing campaign in The Daegal Legends. If you haven't yet read the introduction post, you can find it here. For a compiled list of all of the notes and resources used in this campaign, check out the campaign notes & resources post. 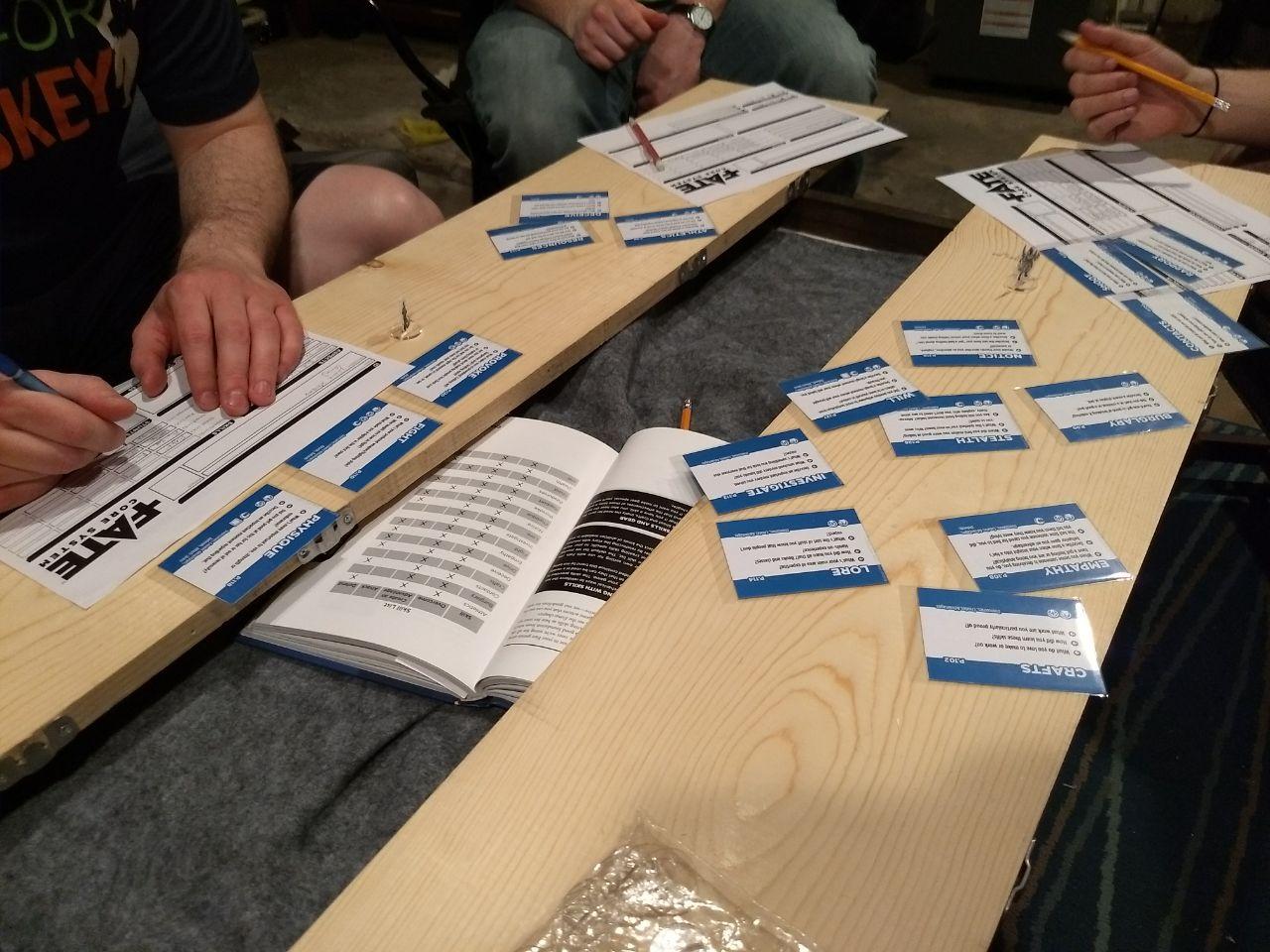 For our first session, we started by figuring out how the group was connected to each other. At the time, we had another player who played as Becky, a middle-aged party girl, and Olaf and Wiggiw hadn't joined yet.

Our story began in the only known colony on Daegal. It is a small town with a tall palisade surrounding it. Inside its walls, there are some wooden houses and buildings, but many of the colonists currently live in tents. The group started in a building at the town's center, a newly built tavern. Since everyone is expected to contribute in some way, our adventurers chose to take an exploration mission to try and find where the missing occupants of the first colony might be. As soon as they accepted the job, Marv, a drunk dwarf at the bar, insisted on tagging along.

The group travelled to a nearby berry grove where some residents of the current colony had gone missing. They searched around and managed to find some drag marks that lead into an opening in a nearby rock outcropping. 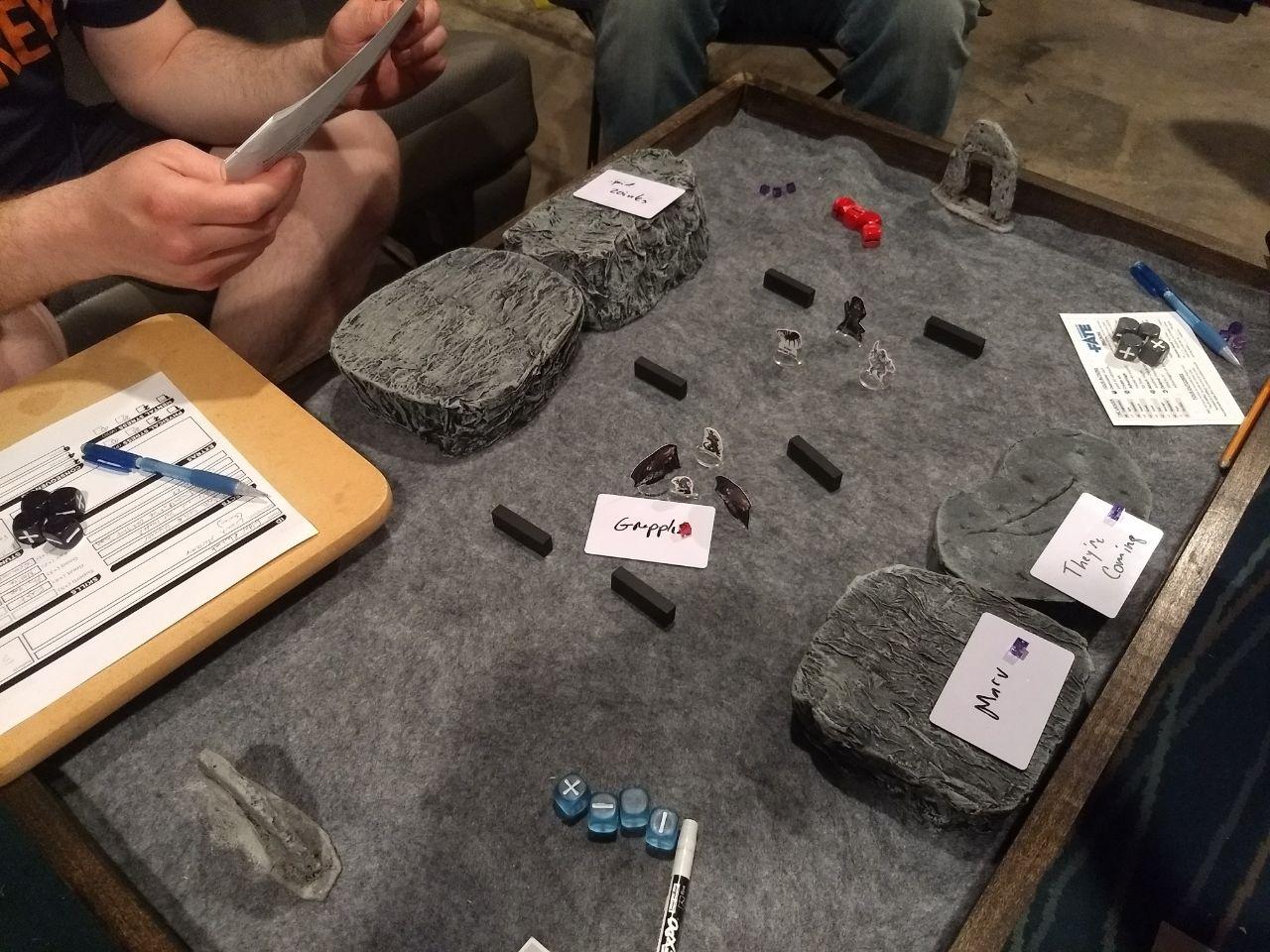 The party ventured into the hole only to find a large cavern, the drag marks continuing ahead of them. tsst tsssst. They heard noises coming from the walls, and before they knew it, they were surrounded by giant spiders. The group fought them off but more spiders kept pouring out of the many cracks in the cavern's walls. Then, something strange happened.

Eldar charged one of the spiders, and it disappeared. Suddenly, it reappeared 20 feet away. Another spider did the same thing. The group realized that some of the spiders had bluish markings and those were the ones that were able to teleport short distances.

The situation grew more dire as one of the blue spiders grabbed Marv and teleported back toward its web. Methuselah and Becky then decided to try something new. They lit up a torch and waved it at the monsters in an attempt to scare them away. The spiders cowered. The two proceeded to launch fire at the webs around the room, which in turn sent a wave of fire rippling through each crack that the spiders crawled out of. With the spiders held at bay, the group ran forward into the next room of the cavern.

This session was a shorter one because it started with some character creation. Overall though, the overwhelming fight with the spiders was a pretty exciting one. I used Fate dice to see how many spiders spawned each time. Minuses were normal spiders and pluses were the bluish, teleporting spiders. Once I did this for a few rounds in a row, the players caught on and realized I wasn't going to let up until they did something to keep the spiders back. Which they did!

This was also the first time I really used any kind of terrain in my games, and we all loved it! I have been making more since that game and every time I bring something new to the table it really adds to the excitement of the current scene. We haven't had any problems with it getting in the way of the narrative either. If you want to see how I am using the terrain in my games, check out this post for more detail.

What do you think is waiting for them in the next room? What was your favorite first session?