Welcome to the second of three posts where I talk about planning and playing through a scenario for Fate. If you haven't already seen the previous post going over the setting and the characters, you should probably check that out before continuing. In this post I'll be talking about how I used the information from the previous post to generate a scenario. So first off, let's do a recap of the aspects in play.

So the first step, as stated in Fate Core on page 227, the first step is to find problems. Based on the aspects above, I generated some problems that I thought I could tie together. Below are the notes I made. I did not follow the ad-libs in Fate Core to the "T", but each of the problems were inspired by those ad-libs.

Sought after by the Dark Dwarf race for spying (Pitus)

A search party has caught word of Pitus's location and arrived in Daegal with the goal of capturing him and returning him to face Dark Dwarven judgement.

Grlrubl has been hired to investigate a murder which turns out to be part of a bigger plot.

I figured I could combine the two issues above into a single problem with multiple tie-ins, so I wrote the following summary.

Grlrubl has been commissioned to investigate a murder within the colony of Daegal. He has been asked to bring the culprit back alive in exchange for a reward. Upon investigating, he discovers at least one clue that points to the Dark Dwarves. They have come to Daegal to capture Pitus and bring him back to face judgement among their people.

The dwarves were trying to get information about Pitus's whereabouts from the victim of the murder. They recklessly killed the victim in the process.

Now that I have a good problem to work with, onto story questions. I was going for a shorter scenario (1 or 2 sessions), so here is the list that I came up with:

Next, I took a hint from the Hit Their Aspects section, and came up with some compels that I could potentially throw at them. I didn't preplan every possible compel, just a couple that I thought would be useful.

Robs Peter to pay Paul (Torvald) - The dead guy had agreed to invest in one of Torvald's schemes. Torvald was counting on that money to pay someone else that he made a deal with, and now has to deal with them at an inopportune time and confess he doesn't have the money.

Sought after by the Dark Dwarf race for spying (Pitus) - The Dwarves claim to have someone important to Pitus in their custody back on Alegra. The compel is that he chooses to believe them because the person is too important to him and hands himself over. This is a prompt for Pitus to fill in his last aspect, or mention someone in the Vitaltreek race that he might consider important. Alternatively, the threat could be that they will kill his friends or maybe even Marv, the bar keep, if he doesn't hand himself over. If he accepts, they tie his hands and the main NPC tells his lackeys to kill his friends anyway.

Lastly, we need to create the NPCs involved in the scenario. 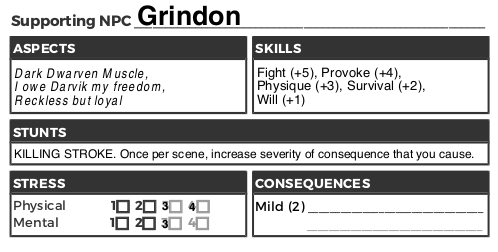 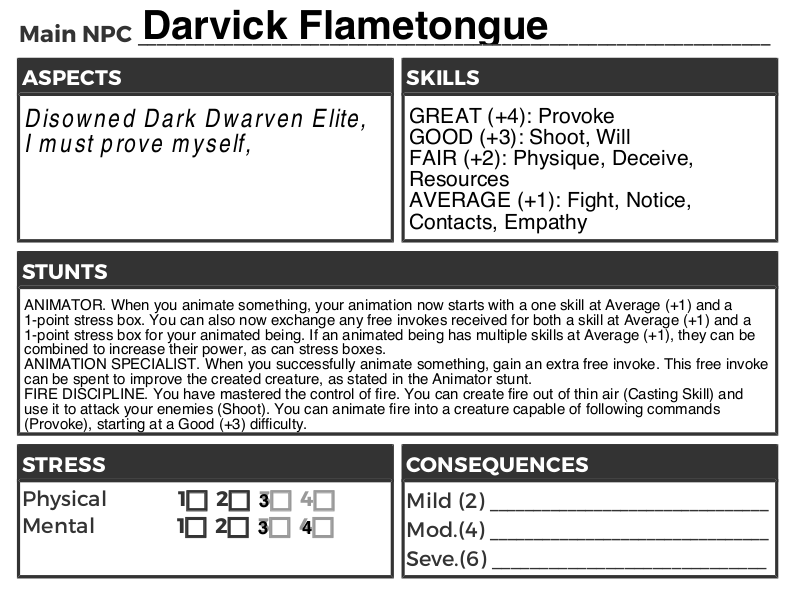 Notes: Grindon was imprisoned for some crime against the Dark Dwarves. Darvik broke him out and won over his loyalty. Now he serves as Darvik's muscle.

I haven't fully fleshed out Darvick yet, but he is basically a Zuko from Avatar: The Last Airbender. He was banished from the Dark Dwarves for something in his past and thinks that turning in Pitus will earn him acceptance among his people once again.