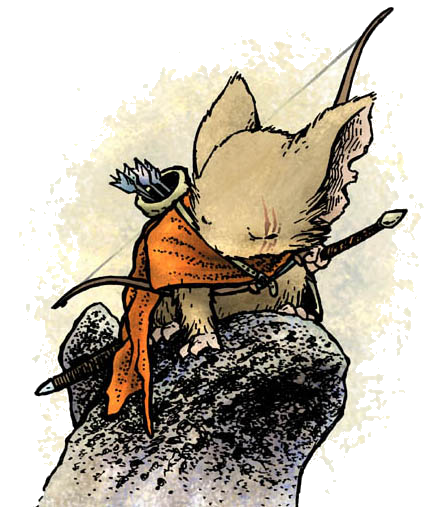 While in between campaigns a couple of months ago, one of my groups decided to do some one shots and mini campaigns; one of which was in the setting of the Mouse Guard. If you haven't heard of the Mouse Guard, you should definitely go check it out. It started as a comic series by David Petersen with AMAZING art and some really cool lore. Its a story of mice that have organized and fortified a chunk of the wild for themselves. An RPG system, based on the Burning Wheel, was written for it later on and is now on its second edition.

However I personally prefer Fate and my players already knew the system, so I used Fate Core to run a Mouse Guard mini-campaign and wanted to share the conversion with you. The only thing that I changed to make this setting work was the character creation process. It still mostly follows Fate Core with a few tweaks.

Names in the Mouse Guard comic books are mainly old English in origin. Take a look at this site for a list of possible names.

The High Concept can be made much like Fate Core suggests, but there are a few things you might want to include.Some suggestions are listed below.

The mice of Mouse Guard come in various colors, some more rare than others.

Generally, you want to vary the ranks within your group. Typically, a patrol is 2-5 mice lead by one Patrol Leader with one or two Tenderpaws in it among other Guardmice. But feel free to change it up and put some unusual groups together.

Rank should really be included in everyone's High Concept in order to define your patrol. It also allows you to differentiate between newer and older members via invokes and compels. Below is a list of the possible Mouse Guard ranks in order from lowest to highest.

Before a mouse joins the ranks of the Mouse Guard, they apprentice under a Patrol Leader as a Patrol Leader as a Tenderpaw. When a Tenderpaw has passed their rite of passage, they are given a colored cloak chosen by their mentor. The color is representative of the Tenderpaw's personality in some way. When you fill in the cloak color and meaning, try to sum up your guardmouse and choose a color that corresponds with it. If your guardmouse is a tenderpaw, add in something about why you joined the mouse guard.

You can set the rest of your aspects as stated in Fate Core. Give your mouse a trouble and go through the phase trio to connect your mice together. If you want to stick closely to the official MGRPG, you can make one of your phase trio aspects a belief that your mouse has. Other good aspects ideas can be a trade that apprenticed in before you joined the Mouse Guard or an important item or weapon that you carry or seek. 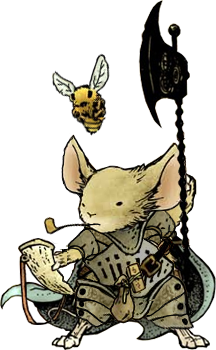 Using something like a Ride skill, unlike Drive, means you are working with an actual living animal. So these rolls can be done using skills like Rapport, Provoke, Empathy, and Athletics instead.

Survival overlaps a lot of other skills and requires a rework of the skill list to balance it correctly. Are you looking for berries? Roll Investigate; Tracking someone? Roll Investigate; Trying to see how much you know about a specific animal? Roll Lore; Want to build a lean-to? Roll Crafts. Survival is just a more specific version of some of the pre-existing skills.

If you want to do Fate Accelerated, that's easy. Just use the existing approaches. To help with the flavor of the game, I recommend using the renamed approaches from Gods and Monsters: Bold, Subtle, Clever, Mighty, Wise, Swift.

Stunts can vary largely depending on what your group wants to focus on. In the official MGRPG, there is a list of boons called "wises" that work a lot like stunts. You can use the "wise" suffix to help tie in the names of your stunts to the setting. Other than that, you can build stunts according to Fate Core or Accelerated. Here are some examples: