Over the weekend, I was itching to play since my normal RPG group has been all over the place for the summer. I ended up running a game for people who had never played Fate before on Tabletop Simulator by Berserk Games using the Fate Workshop Item that I created. So I decided to write up a review so that others can get an idea of how Tabletop Simulator works for Fate and other RPGs.

First off, I hosted a server (which is incredibly easy) and left it open for people to join. We ended up with two players, but could have easily had more if I was willing to wait a little longer.

The adventure we ran was Tower of the Serpents from the Fate: Worlds on Fire book. One change that I made was that we ran it in Fate Accelerated rather than Core. This change was made to make character creation quicker. I had to write my own stats for NPCs on the fly, but it wasn't hard to quickly convert them. 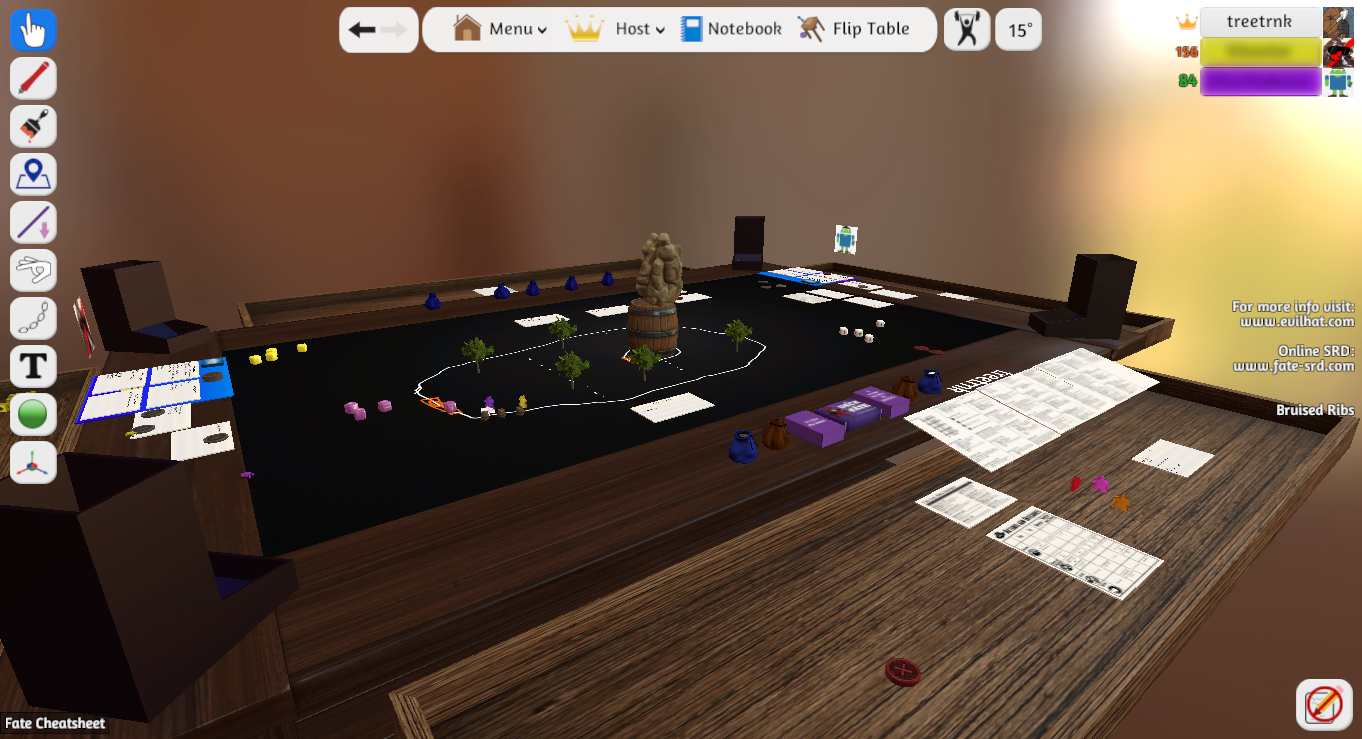 (Warning! This paragraph contains spoilers) The adventure is all about this artifact which is held in a mysterious tower in the middle of the slums of a city. In the tower lives a powerful sorcerer who only leaves during the night of the full moon. Before entering the tower, the PCs approached by three different groups that all want this artifact, and are willing to pay, hurt, or kill for it. The PCs then enter the tower, retrieve the artifact, and are faced with some difficult choices upon returning to the city.

Due to time constraints, we only got to the part of the adventure where the PCs had just jumped over the wall into the garden surrounding the tower, but we still had a great chance to try it out, and even went through a full conflict.

So what did I like about Tabletop Simulator? Well, I would say one huge benefit is the community. If you are okay with playing games with strangers, this is a great way to do it. Just start a server and wait for people to show up. People will then trickle in and you can start a game. If you are not okay with playing with strangers, your friends can easily join you for a game if they are willing to spend $19.99 one time on the game.

Another great thing about it is the flexibility. Tabletop Simulator honestly works very much like a real table in front of you. Yes, some things are a little bit clunkier than in real life, but it does a great job simulating everything. And on top of simulating a real life table, you also have the ability to copy and paste things, delete, and pull props out of thin air. There is a massive amount of built in tools and props, but there is also an infinite number of player made content that can be thrown into any Fate game. 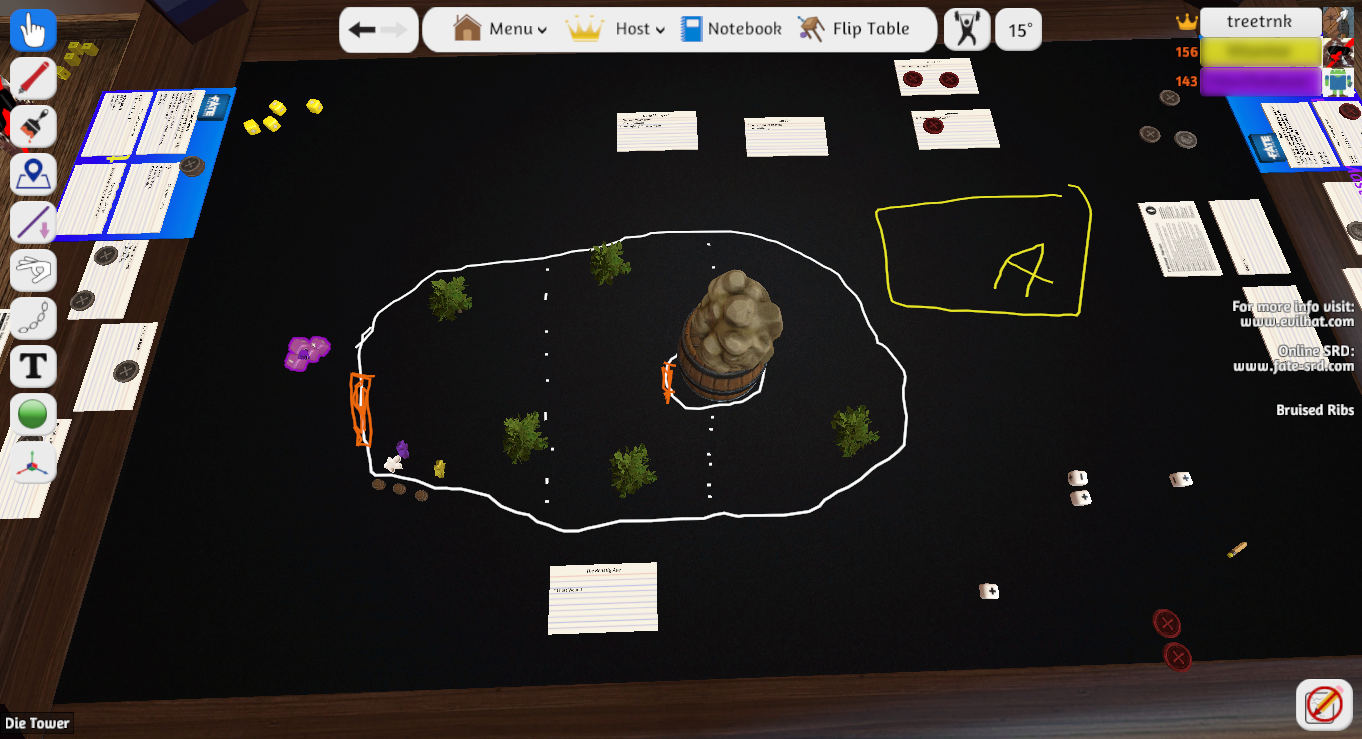 There are a ton of tools to use in game. We used the drawing tool to draw out a map on the table. We also used built in props to create the feel of the location. Notecards were used for scene aspects and such and the in-game voice chat made it very easy to communicate.

The cost of Tabletop Simulator is $19.99 which is great considering how many games you are actually getting for that price. You pay that fee once to purchase the game, but then you have access to almost 10,000 workshop items created by the players for free. This is great incentive to get your online group to buy it since it is not only for RPGs.

The game can be a bit clunky and slow. If you are throwing tons of 3D animated minis into the game it will obviously slow dowm. But even things like writing on note cards or rolling dice can be a bit clunky. Sometimes you'll roll your dice and one will go flying off into the abyss and then reappear in the center of the table. This is only a minor problem, but it is still worth noting. 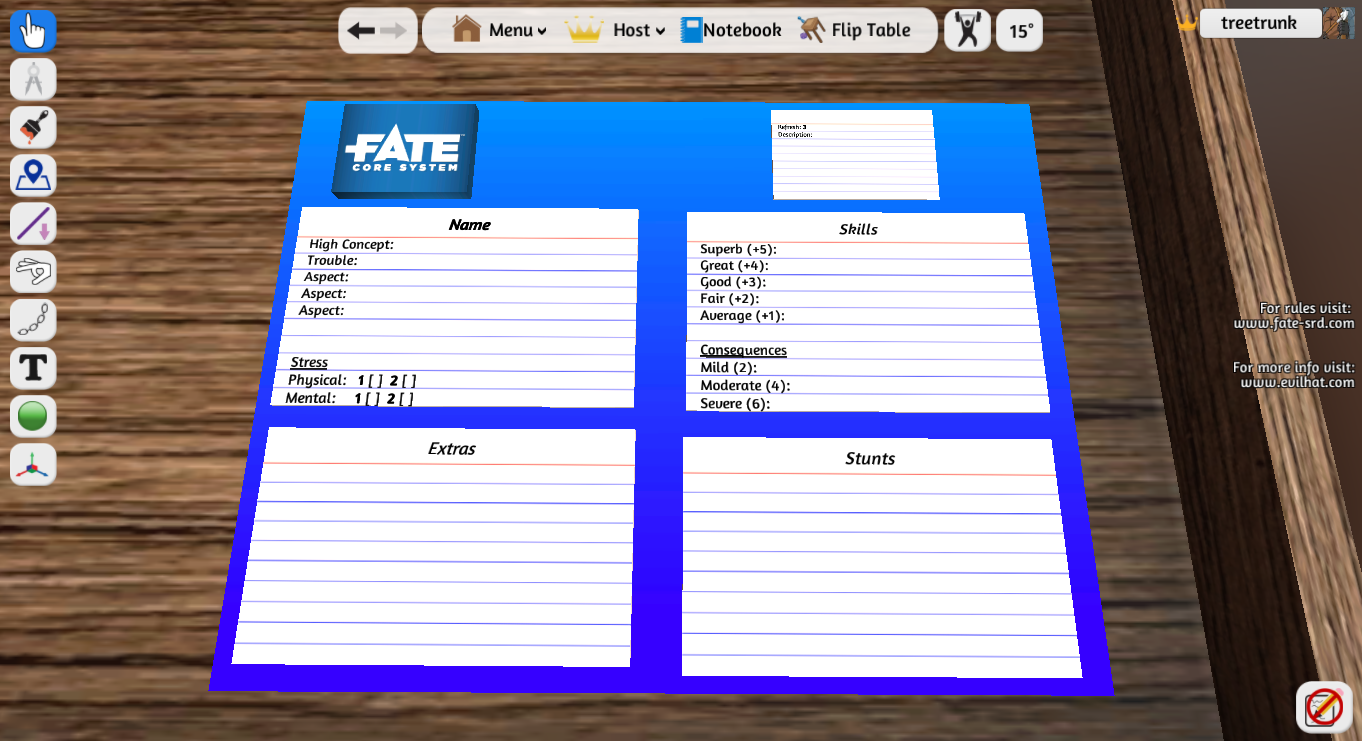 Currently, Tabletop Simulator doesn't have a built in method for handling character sheets. Because Fate character sheets are so simple, I made some out of the in-game notecards, but it is really a work around and not ideal. For other RPGs on Tabletop Sim. the in game tablets are used to display online character sheets, but tablets still don't seem to work on Linux or Mac unfortunately. Otherwise, I would load up the Fate Character Sheet page and make things a lot simpler.

Overall, we had a great time playing Fate in Tabletop Simulator. We were able to do everything we wanted to do and there was more I thought of afterward that I could have done to increase immersion like changing the background or using the MP3 player for background music. There are some things that could be improved to make for easier RPG play, but even with its current issues, the game works well. And lastly, if you like board games too, its a great buy for that reason alone.

Have you ever tried playing Fate or another RPG in Tabletop Simulator? What were your thoughts on the experience?