I've been thinking recently about traditional, simulation-based RPGs like Dungeons & Dragons, Pathfinder, and Savage Worlds in comparison to storytelling based games like Fate. More specifically, I have been trying to figure out why the transition from traditional RPGs to Fate is so difficult. Ultimately, both types of games are about generating a cool story that has been lived in together by the whole group. So what's the problem? How can they be so different if they do the same thing? With these thoughts in mind, I wanted to have a response for why the transition is so tough and what the difference actually is. So here's what I've come up with.

I believe the main difference is the focus. Now, maybe you have already figured this out. I mean, they are rightfully called simulation and storytelling RPGs because that is what they focus on. However, what that actually means was never clear to me or others in my gaming group during our transition to storygaming. In simulation-based RPGs, the focus is very much on rules and simulation. There is a story, but the rulebooks are filled with game mechanics that try to emulate specific actions and events. Everything you do in game has a rule laid out for it. If it doesn't, it has a rule that can be used to get close enough to how something would actually happen. The story is almost a biproduct. Aside from the Game Master/Dungeon Master's role, the story is never brought to the forefront and considered when determining what is going on in it. In fact, bringing up the story can often be considered metagaming and is usually looked down upon in simulation RPGs. Instead of actively talking about the story being created, the story is left to be generated by the mechanics and player decisions. When a roll is made, the roll itself determines parts of the story. When someone tries to do something, the mechanics determine how things move forward. The players do add to the story with their decisions, but the outcomes of those decisions are handled by the mechanics. The mechanics, combined with player decisions make up the players' side of the story. This is not to say that this is a bad thing. It is not. Many people, including me, love playing games in this way. It is just a different approach. 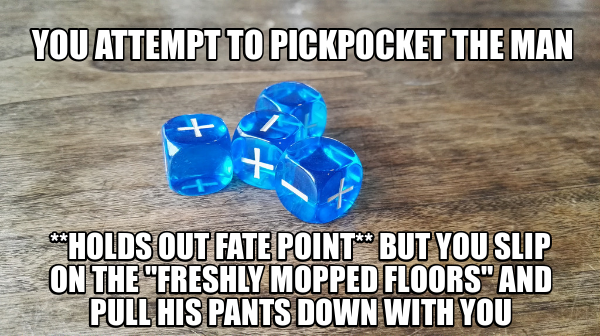 Fate, on the other hand, focuses on the story. Instead of having unique rules to simulate every situation, you have generalized rules. These generalized rules work because they are rules to create a story rather than simulate a reality. The Fate Point Economy focuses on creating a story that is interesting and fun. Mechanics like compels, invokes, and concessions are all there to make for a better story. In Fate, the GM and the players are actively talking about the story they are creating as they create it in order to make it better. Having the story front and center means that you often know more about the story than you would in a simulation game, and knowing more is okay. This type of "metagaming" in Fate is encouraged because it increases investment in the story. Instead of worrying about if the heroes will prevail, the players and the GM alike have the opportunity to alter the outcomes in a balanced way based on what they think would make for a good story. Rather than reacting to the mechanics and randomness of the dice, in Fate, everyone at the table is given authority over the story to add in the highs and lows when it is interesting.

Basically, my conlcusion is that simulation RPGs build their rules specifically to simulate a fictional reality, while Fate has rules designed to directly affect and create a great story. They both ultimately do the same thing, but they do it in very different ways. Now again, I didn't write this to say one type of RPG is better than the other. My preferences may be clear, but it is just that - a preference. Both styles have their place and both shine in different ways. Play whatever your group enjoys! For those who may be struggling with this same thought process, I hope this helps.

What do you think makes transitioning from simulation to storytelling so difficult? What has helped you understand the differences? Let me know in the comments below.