10 - The Temple of Divinity

The group left off being attacked by powerful Giant Cave Spiders. The spiders proved too strong for the party, and so they chose to run. Leaving behind their rations to distract the spiders, they ran and disguised themselves as part of the cavern wall thanks to Filius's magic. They waited until the spiders left and then approached the sigil once again.

They chose to head down, deeper into the mountain, in pursuit of whatever it was that carried a light to the door just before them. The sigil was enchanted with a legendary magical seal, but with the calm concetrative melody of Filius's song Unlock the truth, and the knowledge that Aurora and Eb have of sigils and stone, Desmond was able to decipher the lock. The stone slid away with sound of grinding rock and revealed a new tunnel that headed deeper into the darkness.

As they headed down the tunnel, a blue light appeared directly in front of Desmond, and out of it popped a scroll. The scroll unraveled and delivered Desmond with some information on using the artifact of conjuration that he carried in his pocket. With the artifact, he now knew how to teleport himself, and those touching him, back to Fort Greyspire. At the bottom of the note was Old Man Berkle's signature. 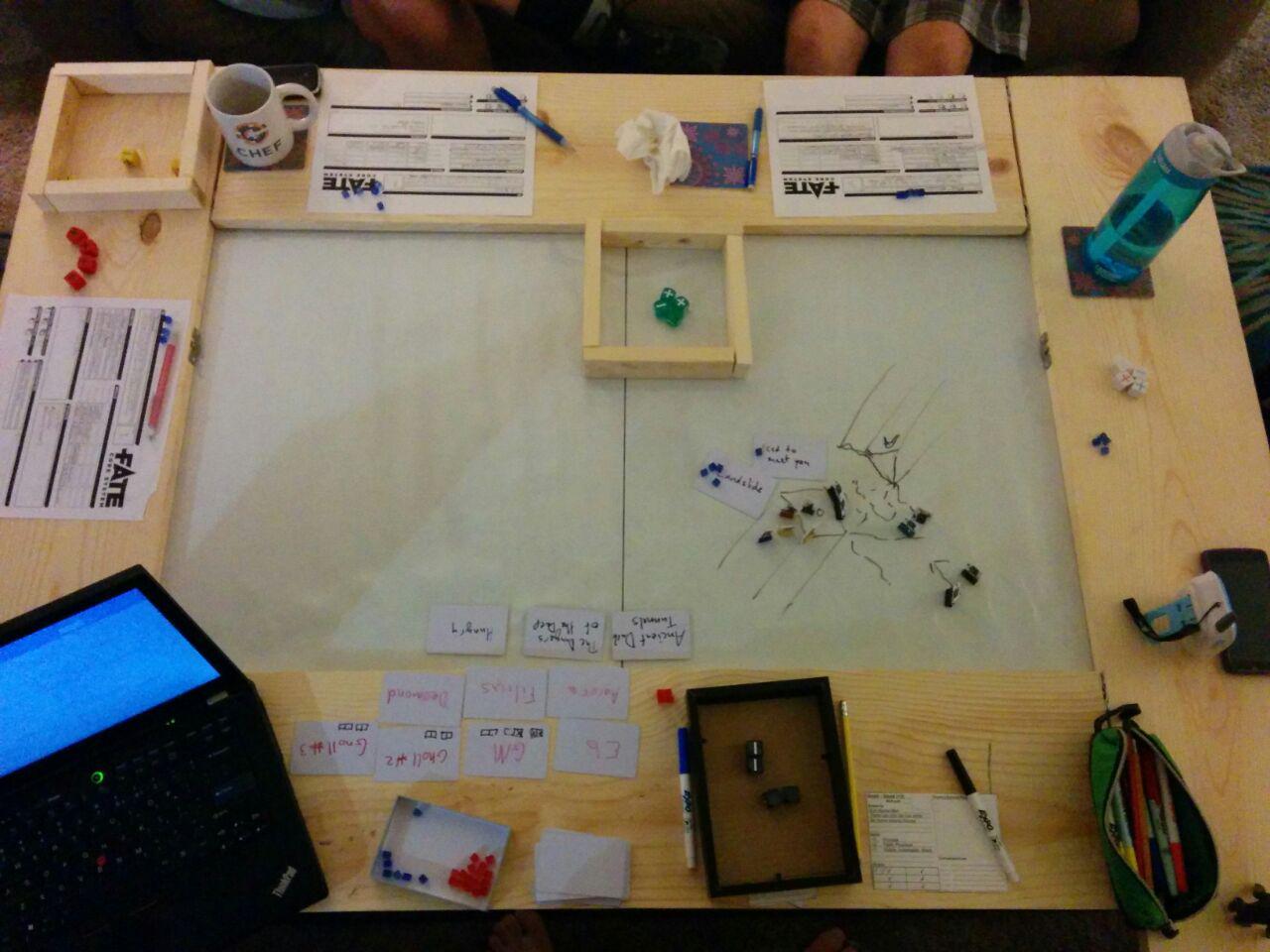 The group continued forward to a break in the tunnels. A soft red glow dimly lit the opening. Filius crept ahead to peer out of the tunnel and saw that a section of the of the tunnel collapsed into a large cavern with bioluminescent red mushrooms scattered about the walls. Filius also spotted two goblins sneaking away into the continuation of the tunnel on the other side of the rubble.

As he did, a cackle echoed out through the cavern. A party of gnoll slavers approached the intersection with one dwarven monk in tow behind them. Eb quickly recognized the dwarf to be his buddy, Mafol, that trained with him in the Power of Temperance. Without a second to think, he cast a spell to cover the floor around the gnolls in ice. A battle ensued and the adventurers easily took down the gnolls with arrows and some conjuration magic. In the confusion, Mafol, was able to sneak away and hide until the fight was over.

The Temple of Divinity

Eb reunited with Mafol who agreed to help the party in whatever way he could. So they continued on, down the rest of the tunnel until they reached a structure resembling some kind of temple. Along the front wall was a phrase written in ancient elven: "See what remains unseen". The group entered to find a bottomless pit keeping them from continuing. With the elvish phrase running through their heads, Eb called forth a rain storm in the room. The rain fell straight down into the pit except for one narrow strip, as if there were an invisible bridge. The party carefully tested and then walked across this bridge to the far end of the room, where another complication was found.

A pair of human legs laid on the ground and a narrow corridor was splattered with blood, but no threat was visible. After some debate, the group decided there must be a pressure plate somewhere, so they threw the legs back into the corridor and two stone slabs slid out of the walls and slammed together. Discovering the location of the trap and its pressure plate on the floor, the group carefully bypassed it and found another piece of the human body: an arm. In its hand was a book diagramming the puzzles and traps in the temple, although, the stone slabs were illustrated a little higher than they turned out to be.

The group continued on through the ancient structure, solving the puzzles as illustrated in the journal. As they went from room to room they noticed a black smoke growing in volume, but were not sure what to think of it. That is, until they reached the final room. 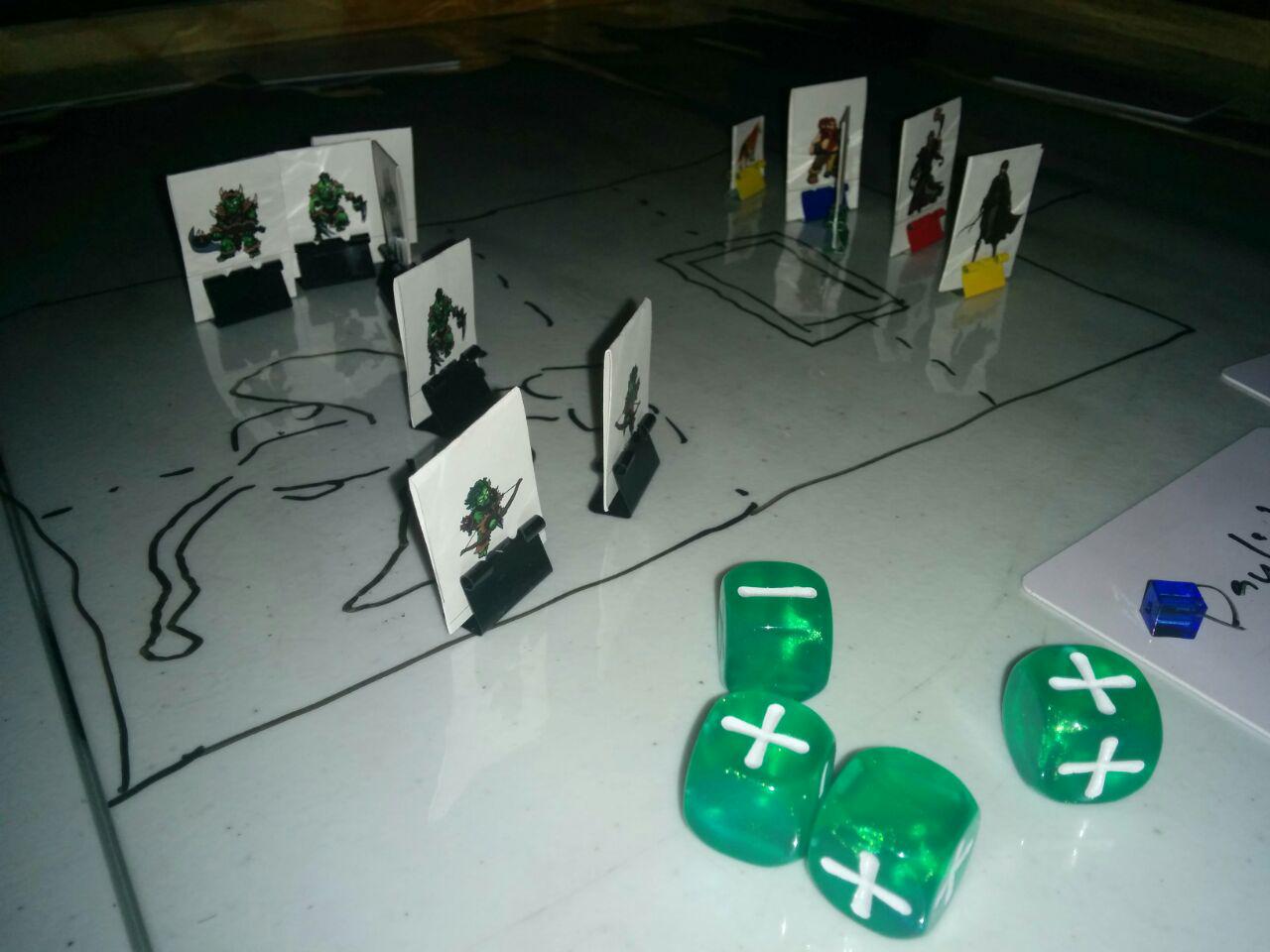 The smoke was thick in this room. A statue of a sphinx stood 25 feet tall in the middle of the room and the alter in front of them, where the artifact was expected to be, laid empty. A slow clap echoed from behind the sphinx and a tall dark figure emerged from the smoke. The figure was armored from head to toe. He carried in one hand a flail that emitted the black smoke from its head, and in the other, the relic of divinity. He laughed said in a raspy voice "Well done. I thought you'd never make it." As he approached, the Relic of Divinity began to glow, as did Desmond's pocket where he kept the Relic of Conjuration. "Well. I only came down here for one artifact, and you've brought me a second." the figure said as he gave a malicious chuckle.

This session may have been our best yet. I have been doing a lot of learning as a GM for the past couple of months. Unfortunately, due to everyone's schedules, I haven't had a lot of chances to put that learning to use, until last night that is. For this session, I really focused on engaging the players and making it fun for them. I know, this is GMing 101 advice here, but it took me some time to figure out how to do that in Fate. I really tied in the characters to the story, and I believe I gave some interesting choices and complications. Unfortunately, we did run out of time at the end, and had to save the final confrontation until next time.