11 - The Battle of the Shadow Knight

We finally reached a major milestone in our Relics of Acyrus campaign and it all came down to a final battle with the villain who had been orchestrating all of the evil plots with the goblins and in Beowood. The previous session was spent getting to the Temple of Divinity and since time was running short, we left the final scene for our next meeting. 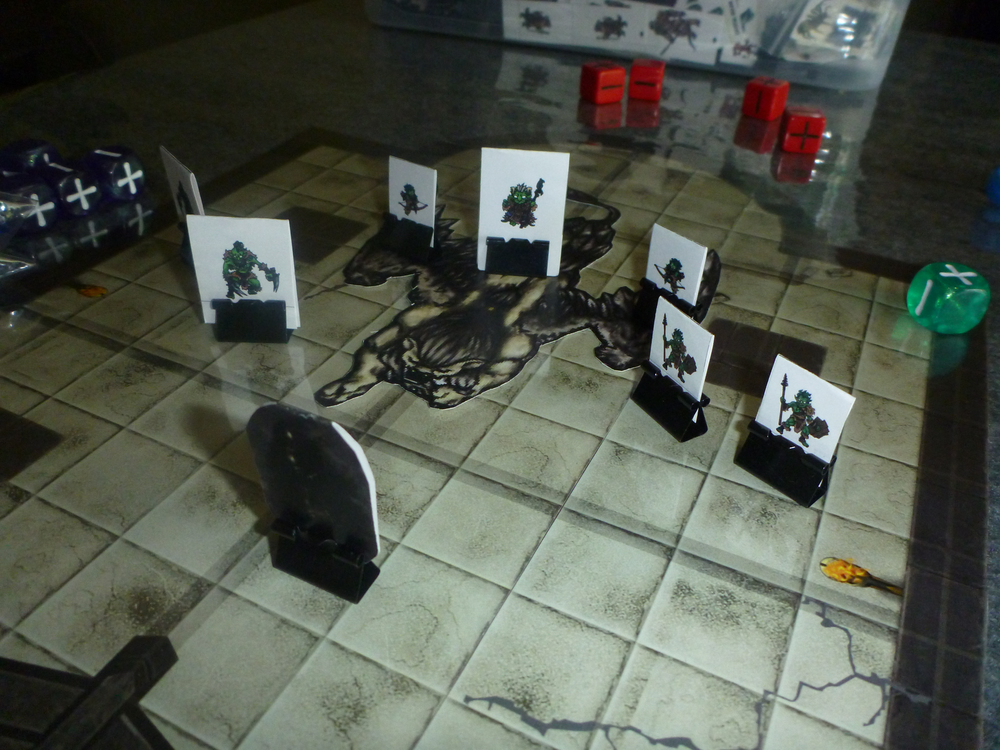 The heroes left off in the Temple of Divinity. They overcame all of the temple's various traps and puzzles and reached the final room where the Relic of Divinity was said to be. However, the relic was missing and the room was flooded with a thick black smoke.

A dark figure in jagged armor lurked forward from the back of the room with several goblin minions in tow. In his hand was a spiked flail; the head of it like a catholic censor, pouring out smoke. He toyed with the heroes showing them the prize they were after, the relic of divinity, already in his possession, and to his surprise it started glowing. Desmond looked down and it seemed the relic of Transmutation, in his pocket, was glowing as well. Seeing the this, the dark knight cloaked in shadow tossed his artifact to Frosz so that the knight could retrieve the other. Frosz worked on creating a teleportation circle as an escape route, and a battle ensued.

I tried to make the fight fun to play with a couple of different elements. First, I put Frosz the Goblin Shaman on top of a large sphinx statue in the back of the room with two goblin archers. Frosz worked on a teleportation ritual (which I set up as a contest with set difficulties basically) to create an escape route for the Shadow Knight and company. He also had the one of the two relics in the room, but he was about 3 zones from where the PCs started and in cover behind the statue's head. The PCs had to be in a zone right next to statue to even attempt a shot at him. The goblin archers mostly laid down cover fire to keep the heroes at the far end of the room. 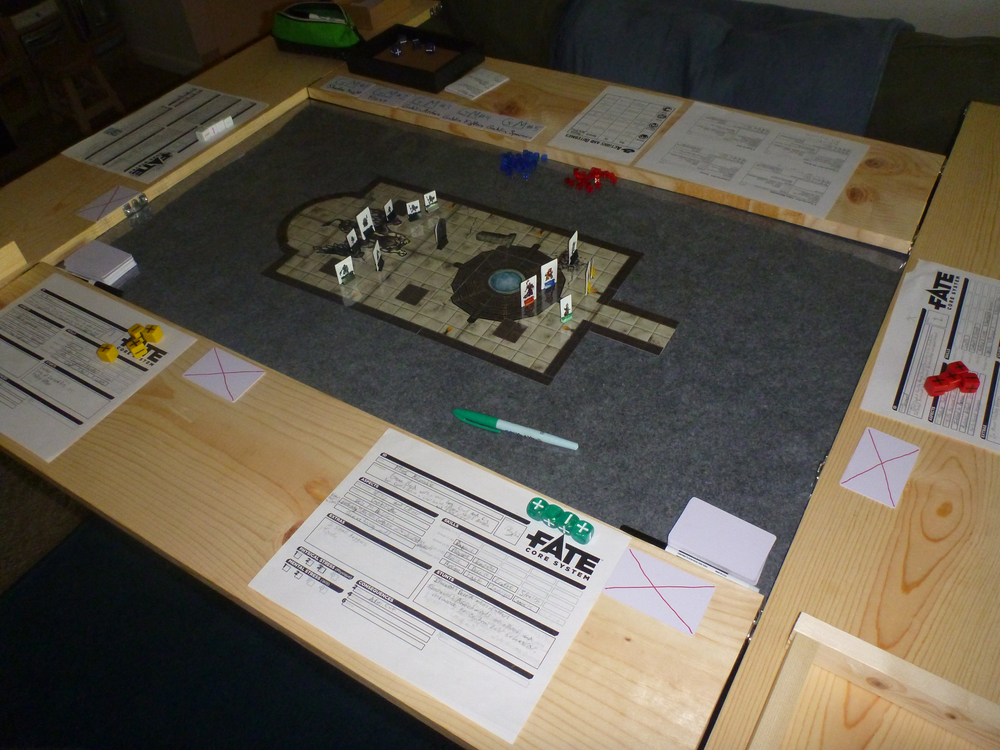 While that was going on I also had 4 goblins on the ground (2 mobs of 2). These guys were also pretty easy kills, but they hung back and took on PCs individually as they tried to progress towards Frosz. They tried mostly to create advantages and mostly failed at everything (although, they did hit Desmond pretty good a couple of times).

Lastly, the Shadow Knight himself was statted as a tank. His highest skill was Fantastic (+6) and he had some cool stunts to disappear into the smoke. He went to the front line and mainly tried keeping people away from Frosz but also tried to wear down Desmond so that he could steal his relic.

I thought the setup for the fight was pretty cool, and that it would be a really good challenge for the PCs. I did not have a planned outcome. I just wanted to challenge them and see what happened. However, when we got down to the actual combat, things didn't play out as well.

I had given the players a couple compels the previous session, and they still had some left over from the session before that. Even worse, I was a little to careless with how many free invokes I gave them. When they walked into the final room, before the shadow knight revealed himself, the PCs each set up one or two advantages. So going into the fight, the players were swimming in +2 bonuses. Clearly this is my fault for allowing all of this, but hey, now I know for next time.

Anyway, the heroes wiped the floor with the goblins on the ground, and didn't realize how much of a threat Frosz was until he only needed one more success. When they finally killed him the Shadow Knight came out of hiding and grabbed relic before the PCs could (compel). He then conceded, and the PCs wanted the relic, so they knocked it out of his hand before he disappeared into the smoke again. As he ran from the room he called back with a warning of his return.

I definitely made some mistakes in this session, and the fight was a bit easier than expected, but it still made for a good season finale for our campaign. The combat was still pretty slow due to some analysis paralysis from the players, but I'm going to try using a sand timer in the future to speed it up. For the immediate future, we will not be continuing this campaign. We will do some oneshots to try different settings and allow for less of a commitment. We might continue this campaign in the future, but it will have to be once figure out a feasible schedule for everyone. What did you think of the campaign and this fight? What would you have done differently?