In light of the recent demise of the Google Hangouts API, I have moved to using Roll20 in my online Fate games and I have really enjoyed the experience. I was reluctant to use it at first because it is clearly made for more elaborate game systems than Fate, but I think I've figured out a good setup. Since many others are probably looking for a place to play Fate online now, I thought I'd share how I use Roll20 for my Fate games. So here is a little tutorial.

To avoid making this post any longer, I'm going to assume that you know Roll20 already. If you don't, go create an account for free and do the tutorial. After that, you'll be able to find all of the images that I reference here in this image album. 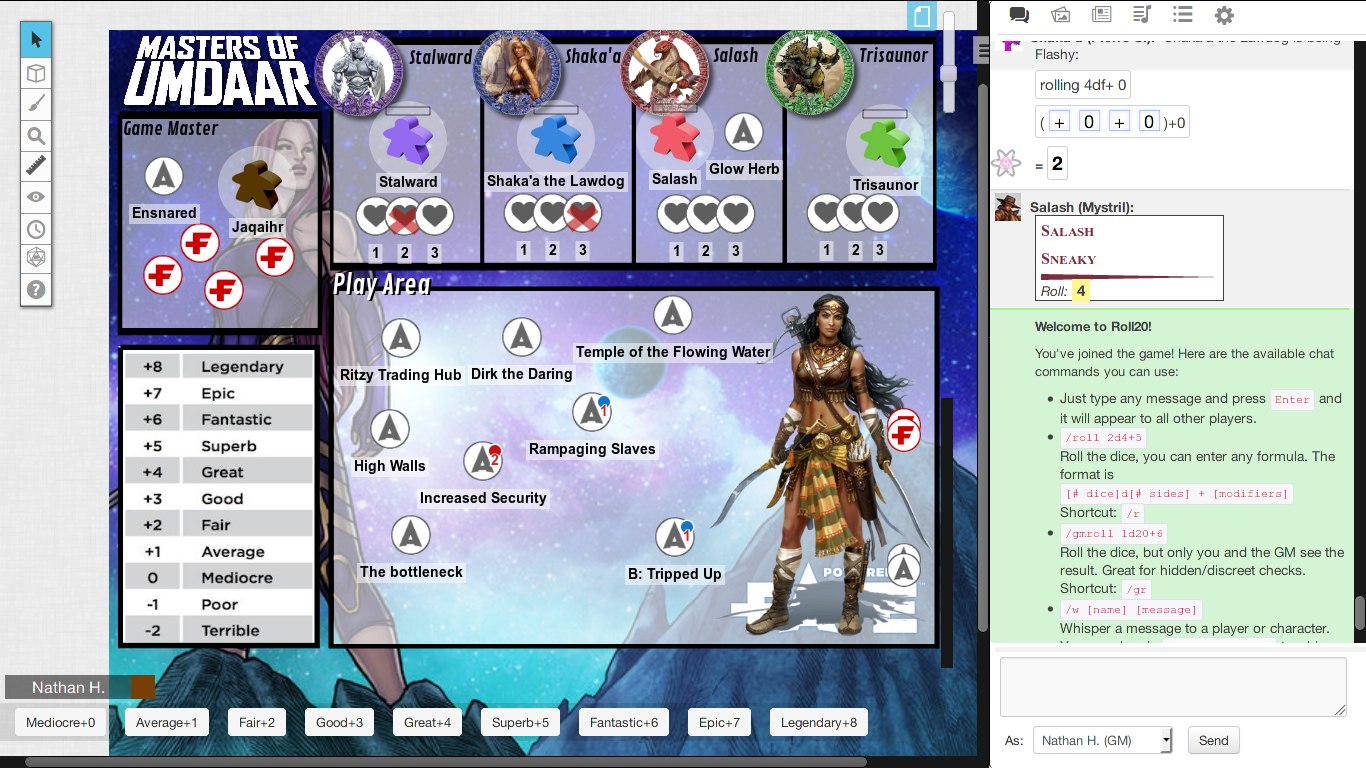 The first step is to create and lay out your page. Create a new page and click on the gear icon next to it. The page size I usually use is 12x9. This allows the whole page to fit even on most laptop screens. I also generally disable the grid, by unchecking the "Enable" checkbox, since it isn't very useful in Fate. In the page set up screen, you can set a background too. Since I cover the background in images, I make the background color bright yellow so that I can easily tell if part of the page isn't covered.

The transparent layout that you see in the image above is available in the image album. To use it, upload it to Roll20 and add it to the map layer. Then stretch it to almost fill the play area. If you wish to use switchable backdrops (mentioned below), you'll need a gap between the edge of the layout and the edge of the page. It only needs to be big enough so that you can select the backdrop without selecting the layout image.

If you wish to create a custom layout instead of using the prebuilt one, start off with the Draw Shape tool. Draw boxes with a Regular sized outline and a transparent middle. If you want to make a row of equally sized boxes, make one (don't worry much about sizing), then copy ctrl+c and paste ctrl+v it onto the page. Then you can drag it to line up with the original. Hold down the Alt key while an item is select and use the arrow keys to nudge it in a certain direction. Once the two boxes are lined up, select one or both and repeat the process until you have the right amount of boxes. Then select all of them, and resize the group to fit the desired location.

The last step to creating the boxes is the background. In the image album, you'll find an image named white60.png. This image is just a white box with an opacity at 60%. Upload the image and drag it's corner to the size of whatever box you are creating a background for. Make sure you right-click on the white box and choose "To Back" so that the background will sit behind the borders. If you want to use a different image for the box background, upload a different image and use the process above.

Once you have the boxes laid out, you can add a background. If you are using the semi-transparent box background like I do, try to find a background image that isn't too noisy. You also want this image to about 1000x800 at least in size. You can find an image on google or screenshot a zoomed-in PDF. Upload the image, drag it to the correct size (you might have to reposition it to get it big enough), and then right click the image and choose "To Back". You can then select it by clicking in between the boxes already in place and drag it or use alt+arrow keys to reposition it.

You can place multiple backgrounds this way. Use the same process, and whenever you want to change backgrounds, right-click the top-most image and send it to the back.

Other items like a logo can be added like any other image. You can create your own too with a program like Gimp, an open-source (free) photoshop equivalent. Editing and creating images is outside of the scope of this tutorial though.

Once you create this layout once, you can use ctrl+a to select all items on the map layer and copy/paste it onto another page. Unfortunately, you'll have to recreate it for each separate game you play in, but moving it between pages, within a game, works fine.

I use several different tokens in my set up, and I have included most of them in the image album for your use. Here is a break down of how I use them:

Aspect tokens are set up as a card deck. Go the Collection tab of the sidebar and click the "Add" button next to the "Decks" header. Set up the deck using the values pictured to the right. Then add two identical cards, giving them the same backs as fronts (using aspect.png), and save it. Back in the collections tab, click the "Show" button to make the deck available on the screen. To create new aspects, drag one "card" onto the page and double-click it. Then give it a name, check the Show Nameplate checkbox, and show the name to players in the Advanced tab of the window.

In play, I use the name plate for the actual aspect text, and I use the bubbles for free invokes. Click on the bubble icon and then type a single-digit number as you hover over a color. I use blue for PC invokes and red for GM invokes. Also, if the aspect is a boost, I usually start the name off with "B:".

For character tokens, I have included meeples. If you aren't handy with Gimp or some other image software, those should work just fine. Although, it is nice to see an image of your character if can find one.

I also use Bar 2 to track Fate Points. After you have linked your character sheet, choose "current_fate_points" from the drop down next to Bar 2. The left input field should autofill to whatever your current fate points are set to on your character sheet. For the right input, just enter a 3. This creates a blue bar above your character token that adjusts depending on how many fate points you currently have (out of 3).

You may have noticed that fate points are also included in the image album. Since the GM doesn't have a consistent character to track fate points on, I make another card deck -- like the aspects deck above -- of red fate points for the GM. I just place them in the GM box when a new scene starts and delete them when I use them. Its a good way for the PCs to easily see what I have.

My group currently doesn't use the blue fate points, because we have found it easier to track on the character sheets if we update it through the blue circle on their character tokens. I have heard of others using fate points as cards though, so I thought I'd throw them in for good measure.

It is good to set up some macros to make the character tokens more useful. To do this, navigate to the Collection tab again in your sidebar and click the "Add" button next to the "Macros" heading. The macro I use for Fate Accelerated is:

This macro rolls 4 fate dice plus the selected token's Careful approach. This only works on tokens that you have permission to control and that are linked to a character sheet. For Fate Core, or other approaches, just change each occurrence of "Careful" to use a different skill/approach from your character sheet. You can also change the first line to output different text before the roll. Make sure that you check the "Show as token action?" checkbox and make it available to all players and it should be good to go.

Another macro that I use is an "In Bar" macro. As the GM, I don't always make new character sheets for each NPC. So if I want to roll the dice, I would normally have to do it manually. To make things quicker, I add a macro for each step of the ladder using this format /roll 4df+1 and name it according to its value, "Average+1" in this case. I don't give anyone other than the GM access to these macros and I don't make them token actions. Once they are saved, check the "In Bar" checkbox next to each of them and they will display as clickable buttons along the bottom of the screen.

So that's all I've got. Is there anything I missed, or anything else that could use some more explanation? Have you found any other useful trips for Fate on Roll20? Let me know in the comments below!