To get back into RPGs again, the first game I ran was in the Mouse Guard universe. It's one of my favorites, due to the beautiful art that I can use in games and the unique fantasy setting with tons of lore.

When planning this game, I knew I had one player who had read the comics, so playing through the first comic like I had done in the past probably wasn't a good idea. Instead I chose to start at the onset of an event in the setting's recent past; the Winter War of 1149.

For those of you that aren't familiar with the Mouse Guard, the Winter War of 1149 was a war between the Mouse Territories and the Weasels of a nearby underground complex known as the Darkheather. Not much information is given about the event in the comics (although I hear a new one is being made about the war), so I thought it would be fun to tell the story of how it started.

Below I have included my prep for the session in case you would like to run a session like this as well. If you want to see how we created our characters for Mouse Guard in Fate, check out this blog post. Also, I suggest you read at least the first two Mouse Guard comics (Fall 1152 & Winter 1152) before running this, as they cover some necessary lore. I tried writing this post with all of that backstory in here, but it was a bit too much, and the comics do a much nicer job of it anyway.

It is the year 1149 and winter is approaching fast. The players have been sent by the current Matriarch to check up on Walnutpeck, a town on the far edge of the mouse territories. The town supplies much of the territories with black walnut meat to help them get through the winter. The snow storm that is said to come early this year will likely make it difficult to harvest everything that they need.

When the players arrive, they pass through hordes of harvesters gathering and peeling the husks off of hundreds of black walnuts. The PCs know that Loukas and Saxxon, two other guard mice, were here previously and should have moved on in their patrol by now. The Matriarch was unable to get in touch with them before they moved on supposedly. They should also have a general idea that the Mayor is likely the best person to ask where they can help.

Walnutpeck is a town built inside of a dense briar patch. The mice of the town have a pulley system set up to spread the briars apart whenever larger items need to come through, but a mouse sized creature can travel through the thicket without too much trouble.

The players arrive around midday and have until about nightfall to investigate what is going on in the town. 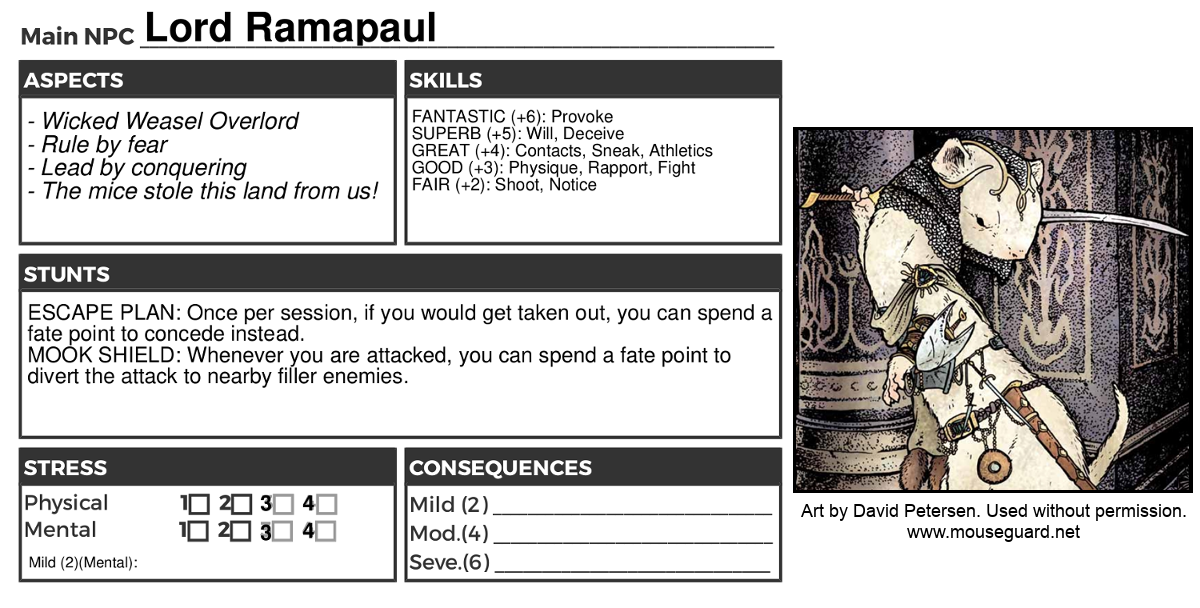 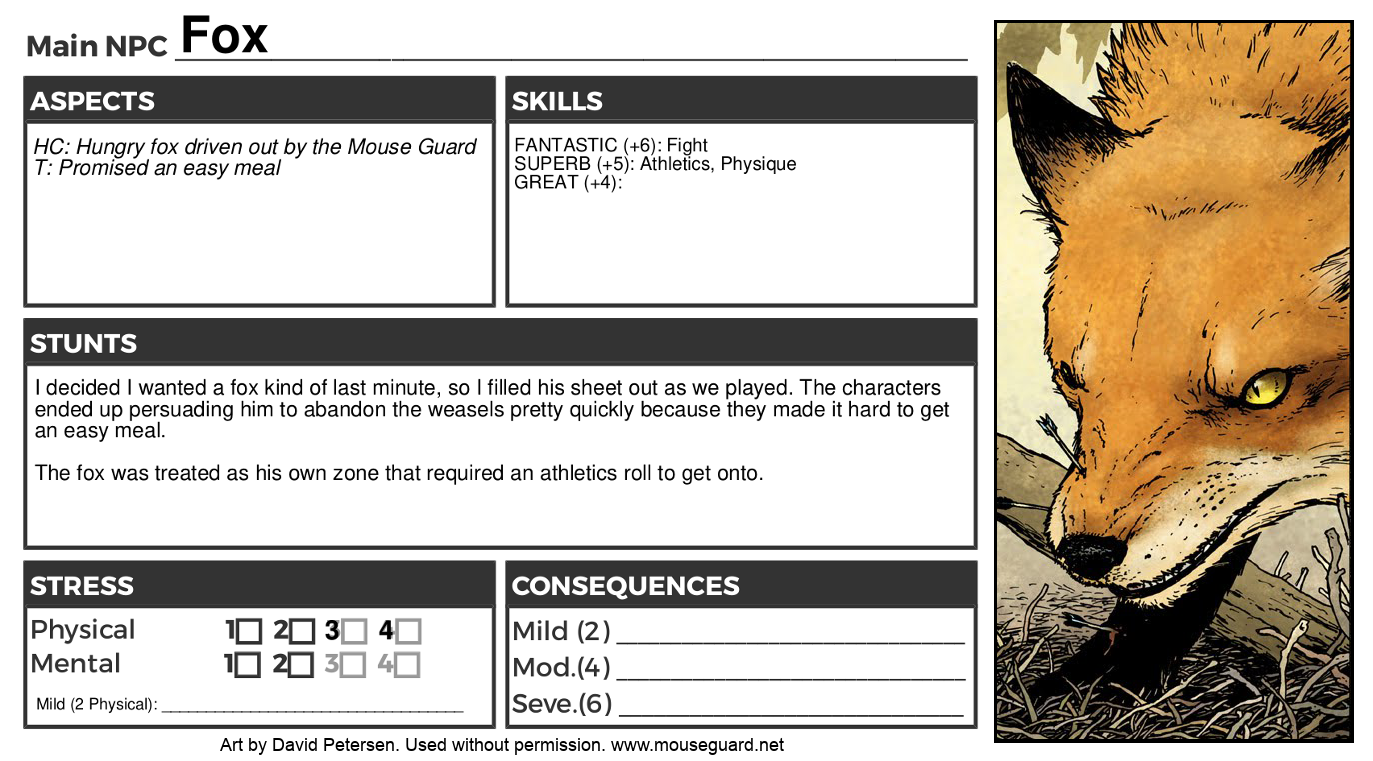 Walnutpeck is a town near the scent border; a boundary where a scented concoction is poured to drive off predators. The town is known for harvesting and providing black walnut meats to the Mouse Territories and was built inside of a dense briar patch. For some cool art that you can use to represent Walnutpeck, see here. The Darkheather is an underground labyrinth that the weasels took over and now call their home. Rumors have spread that the weasels were right outside the mouse territories, but no one knew that they were tunneling under the scent border.

Aspects: Dark maze of tunnels, Littered with bones of their victims, A stolen home

The forest around Walnutpeck is filled with tall black walnut trees and therefore lets in less light. The players will probably be interacting with the forest mostly around the final harvest.

My group had a ton of fun with this adventure. I presented a few things slightly differently which I think may have nudged things in a certain direction, but it was still a blast in the end.

The PCs started out by investigating the missing guard mice. They headed to the far end of town and found their trail into the forest. Markings of a scuffle were found and then larger footprints leading into the Darkheather entrance. They knew they might not get back in time for the harvest if they went further, and assumed the other guard mice to be dead. So they spent some time rolling a log over the opening and they headed back so that they could help protect the final harvest.

At the final harvest, the snow started coming down and Lord Rampaul quickly attacked with his fox and weasel lackeys. A fight ensued leading to the fox being convinced this would not be an easy meal. And even though they managed to stop Rampaul's assault, they were occupied long enough for the weasel at the far end of town to move the log and light the briar patch on fire.

Are there any changes that you would make? Have you run this scenario with your group? Tell me about it in the comments below!