Meth, Wiggiw, Olaf, and Eldar crashed into the forest floor from the treetop village where Wiggiw had just destroyed the artifact. They were all hurt by the fall, but Wiggiw took the worst hit, breaking his neck. Olaf, eager to earn Wiggiw's acceptance, quickly tied Wiggiw to his cannon as a makeshift stretcher.

The group dusted themselves off and began to survey the area. Loufie, Chum, and Sable were no where to be found and the place where they had previously stood was now replaced by a pillar of magical energy blasting into the sky. As they looked, they began seeing creatures moving in every direction. The sound of cracking twigs filled the air, along with an occasional groan of a tree being uprooted. The group tried to quickly figure out a plan, but they were surrounded by twig blights in seconds.

The blights charged the group in a chaotic rage. They displayed no self preservation, thrashing violently. The adventurers tore through the creatures, but were quickly surrounded by at least as many as before. The pillar of energy seemed to be animating the whole forest!

"Run!" Eldar bellowed as he charged toward what he knew to be the closest edge of the forest, and the group followed suit. They took turns leading the way, smashing blights to create an opening, and spotting routes that were less overrun then others. They began to gain some ground, but the situation worsened. 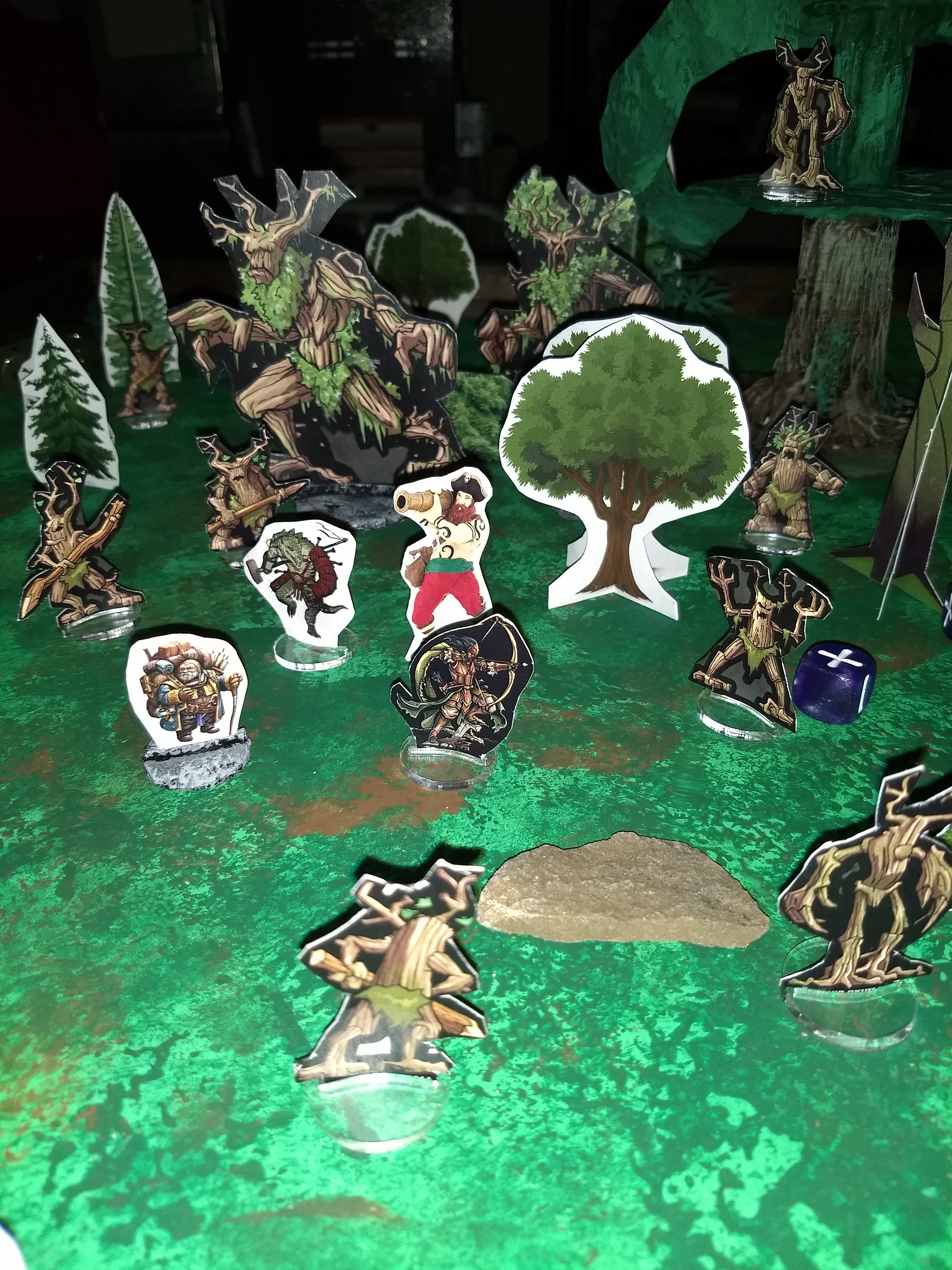 More and more blights kept tearing themselves free of the ground, forming larger groups and tighter paths. Just when they thought things couldn't get any worse, they were haulted by the deafeningly close sound of tree roots pulling free of the earth. Three treants came to life and lumbered after the players. The one in front slammed Olaf with the back of its limb and Olaf barely managed to turn himself to keep Wiggiw out of danger. Olaf responded with a bomb, blowing several of the blights to bits along with a good chunk of the treant's leg.

Methuselah spotted a path where the treants couldn't follow and Eldar charged forward, shattering the tree blights in his way. With a little more help from Wiggiw's meteorology specialization, they were able to get an idea of where a nearby body of water might be, and ran for it. 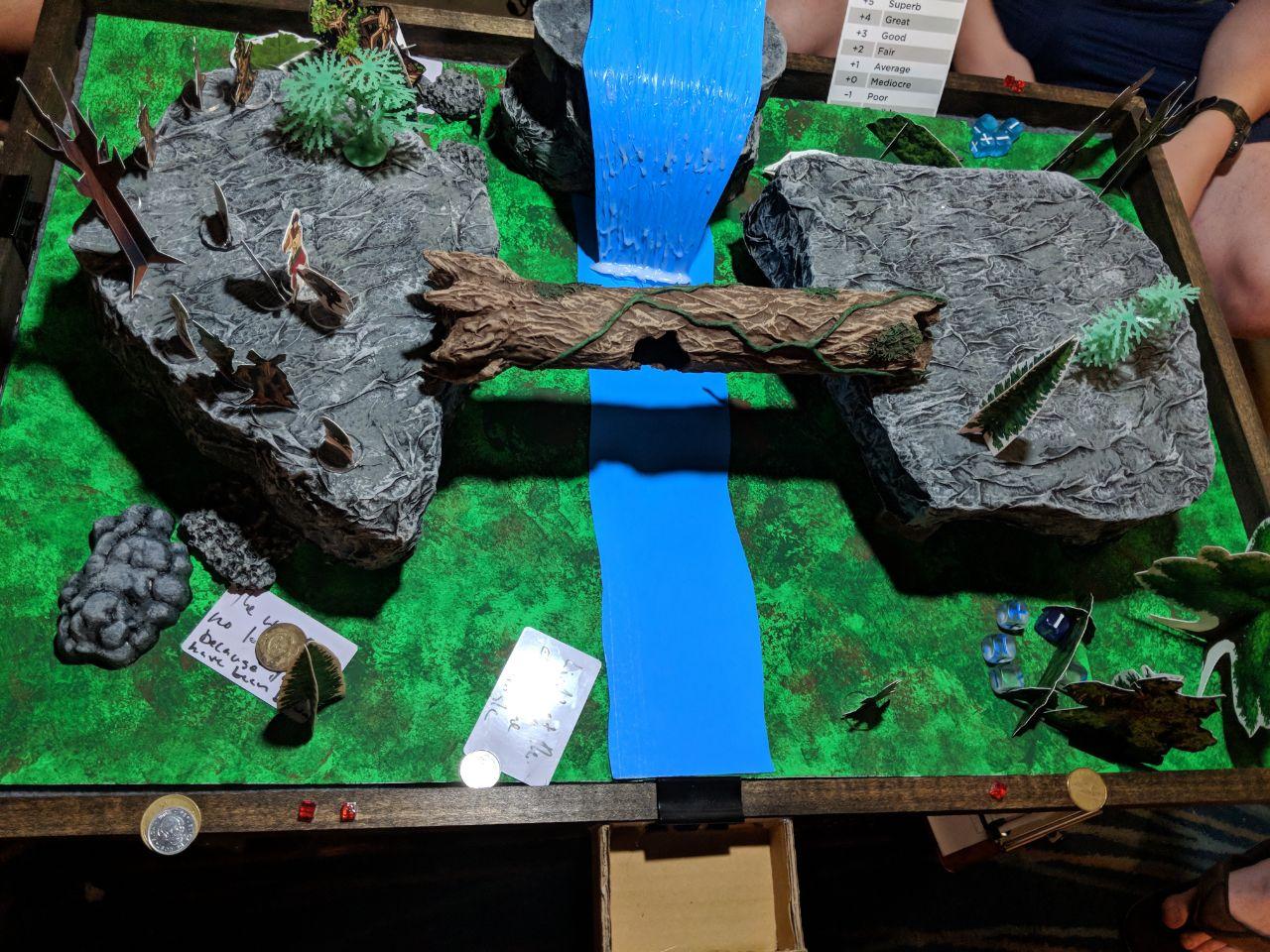 They reached the lake and could see the edge of the forest on the opposite shore. They considered swimming, but they decided to run around it to avoid whatever animated plants may be hiding in the murky water. As they did, Wiggiw spotted a foot print that he hadn't seen in a very long time. Before he was able to recall what it was, the group ran into a dead end. Ahead of them was a large canyon carved by a river far below and behind them was an army of twig blights and treants. Their only escape was a damp fallen tree spanning the canyon. 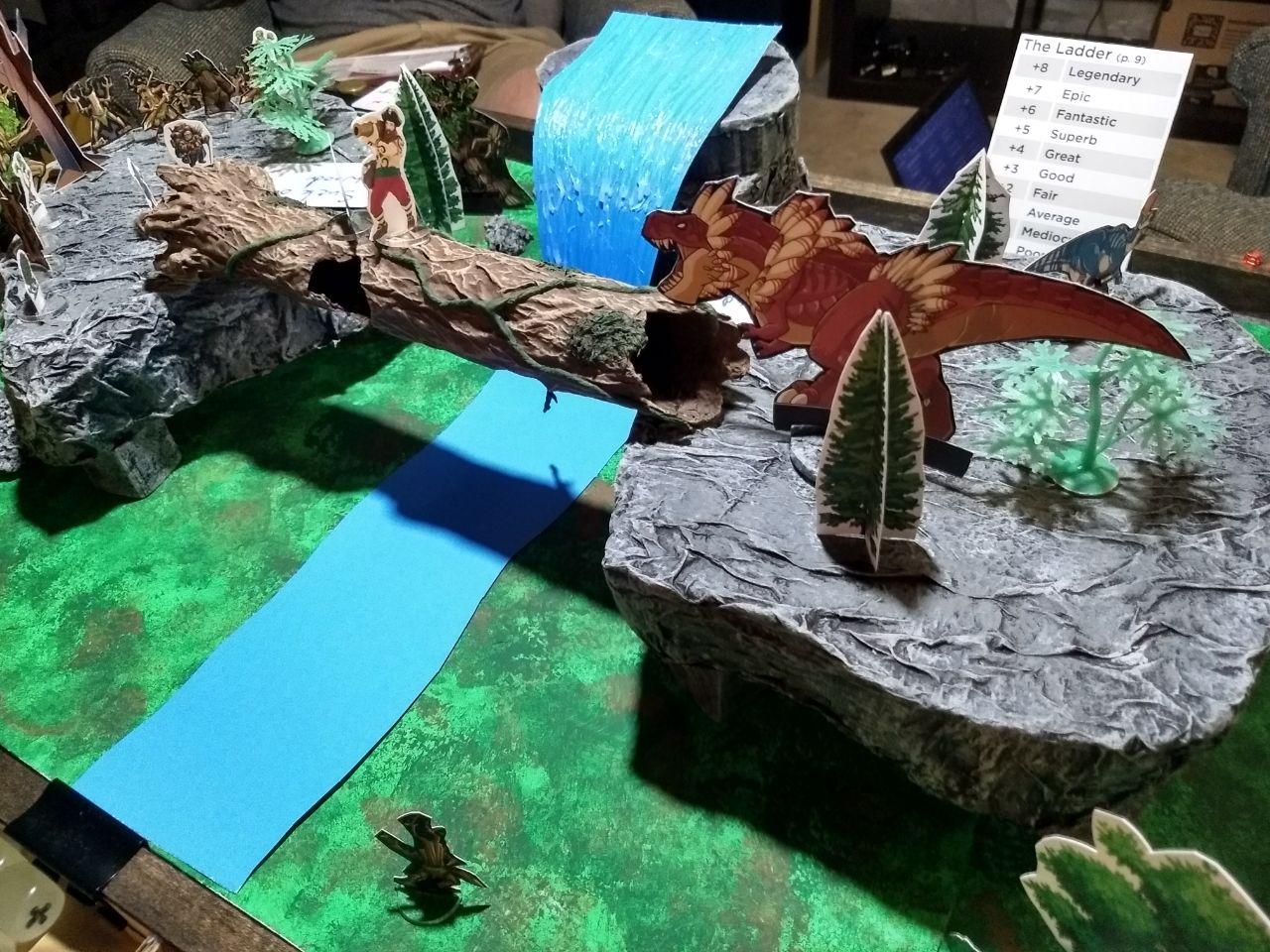 Eldar smashed one more wall of twig blights while the rest of the group scrambled onto the log. Then, another terrifying sound reminded Wiggiw what type of creature belonged to the footprint he had seen. A thundering roar echoed through the forest. Then a small duckbill dinosaur ran by, pursued by a massive T-rex, creatures that had not existed in the world for a very long time. The t-rex saw the group crossing the log and stopped, favoring the easier meal.

With the king of the dinosaurs licking his lips on one side and an army of thrashing sapplings and trees on the other, the adventurers had to think quickly. Eldar took another swing at the twig blights and then jumped on the log. "Hold on!" Olaf shouted as he threw two very well placed bombs, one on either end of the fallen tree. They exploded, sending the log, the party, and the t-rex (due to me dumping all of my fate points for a success with a cost) plummeting into the river below. 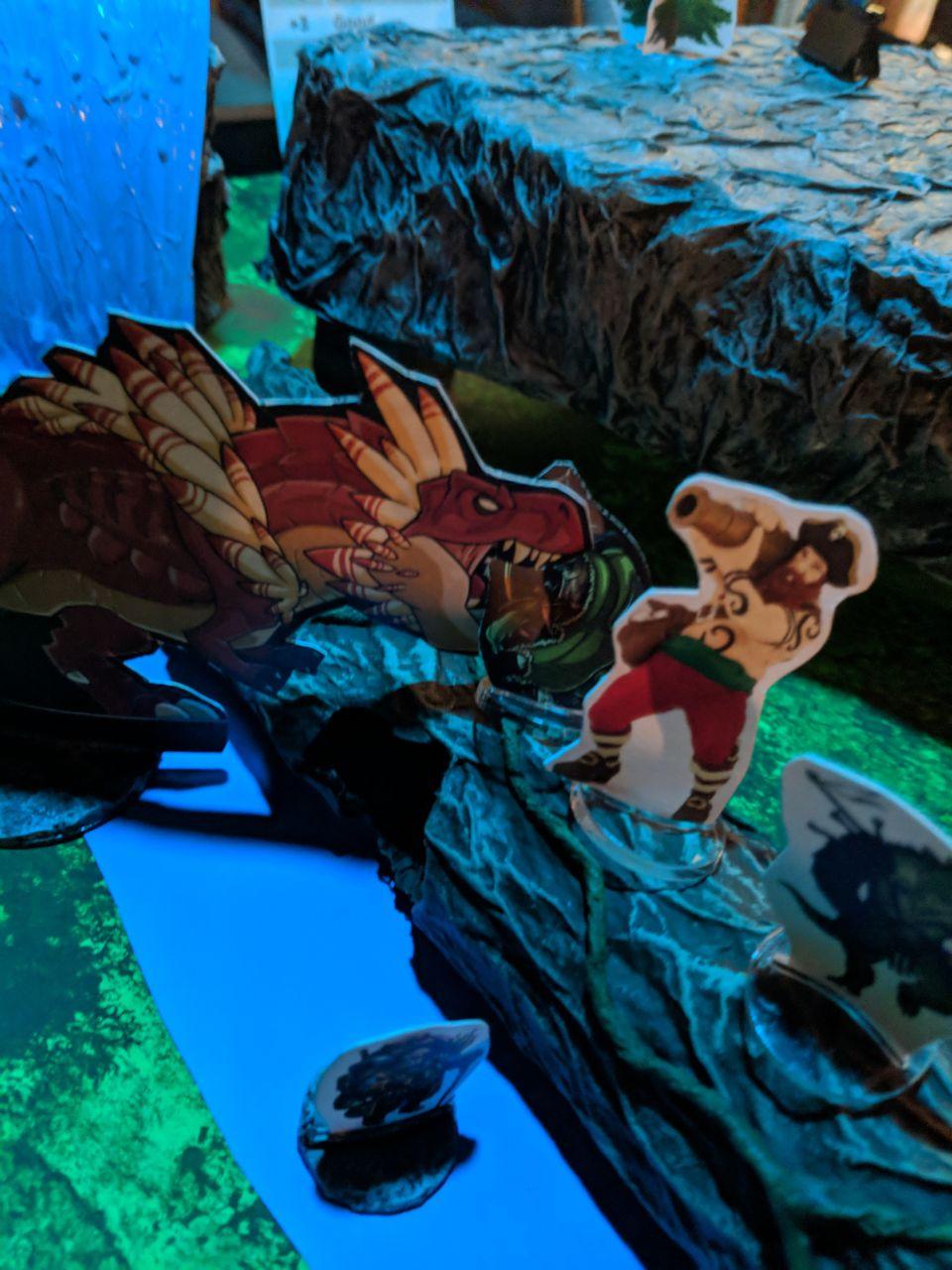 Everyone managed to stay on the log except for Methuselah, who now bobbed along side it. After a few moments of silent fear, the t-rex surfaced as well and began biting at the group. Seeing Methuselah in rough shape, Wiggiw swore loudly at the dinosaur trying to draw it's attention (with the Provoke Violence stunt). The creature chomped down in his direction but was stopped short by the canon he was still tied to. As the monster tried to chomp down, its tongue ran across Wiggiw's face but it was unable to satiate its hunger. 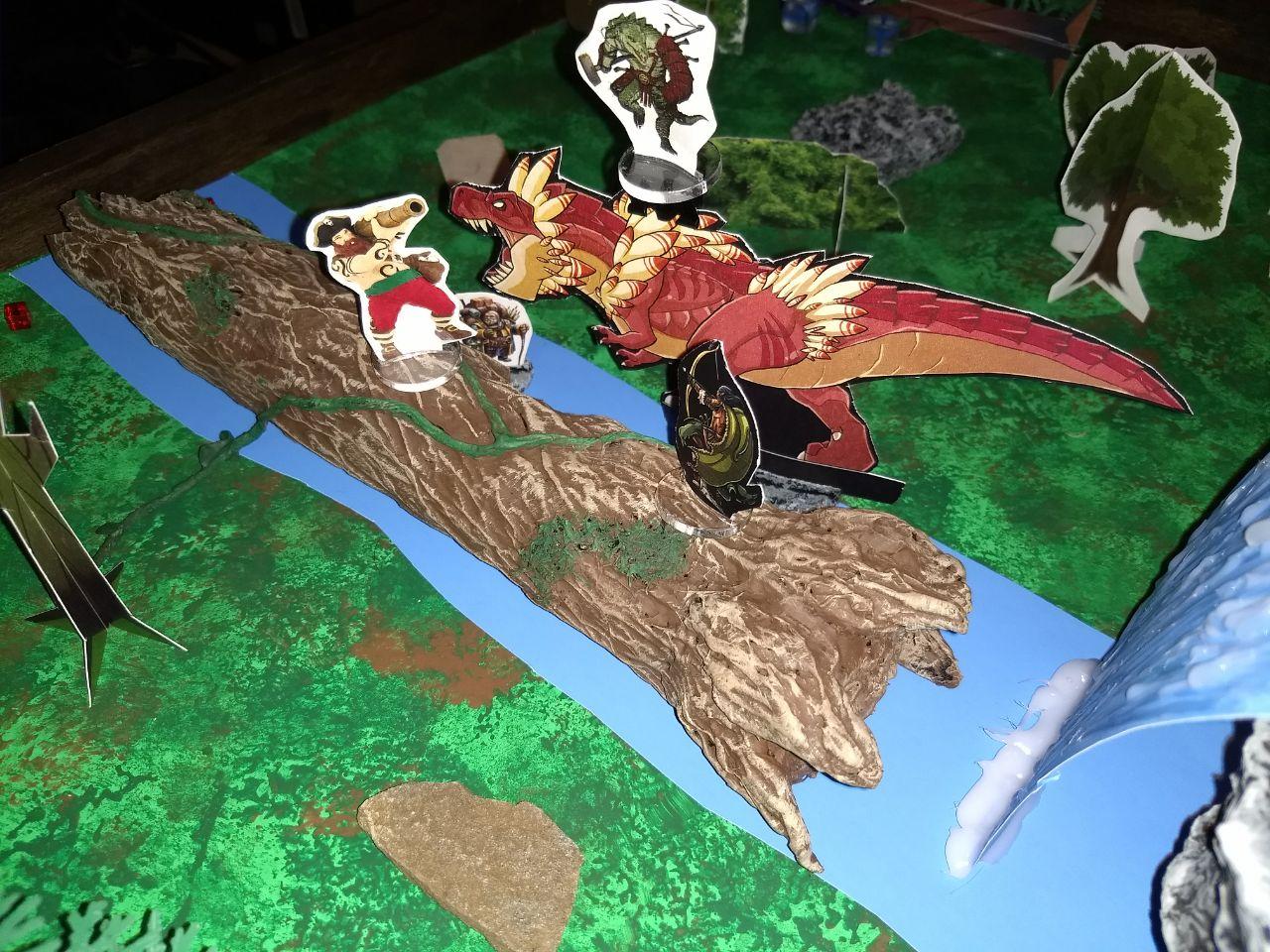 The group looked for any and every weakness. Wiggiw noticed its motion vision while Meth found a weak spot. Then Olaf grappled the beast's mouth shut so that Eldar could run up its backed and cave in its skull with his hammer (with a 20 point hit; it was awesome!).

As the crew rode the log out of the now living forest, the t-rex sunk to its watery grave. Beaten and battered they finally arrived back at the colony, in hopes of finding some kind of healer and figuring out what happened to Loufie. When the the very pleasant sight of the colony finally came into view, they overheard one of the guards on top of the palisade yell, "Conick has been attacked!"

This session was possibly the best I've ever run. The players were starting to get a better hang of the rules, and with some tips at the beginning of the session, they really started creating advantages well (see the t-rex death above).

The chase out of the forest with the blights and treants was a lot of fun too. I never actually took any of the minis off of the table. Instead, every time some were killed, I just respawned them further from the PCs. This really helped give a sense of dread.

It was also a fun scene because instead of doing a contest where all of the enemies were pure narrative, I made the forest itself a character. Attacking the forest was done with skills like Investigate, Lore, and Fight (if they were just smashing a path), and defeating the forest meant they reached the edge of it. I had planned for the log scene as the actual exit of the forest anyway, so it worked out perfectly that Wiggiw led the group towards a lake.

This was a super epic session that I don't expect any of us will forget!

How would you handle the forest escape scene? What do you think the adventurers will find in the colony? Let me know in the comments below!