"So, ya got my records?" A voice came from the the scattered trees surrounding the cove where Wiggiw and Methuselah waited. The two turned to see Loufie, flanked by a burly, shirtless man with a bald head and an female Orchid Treek (a species of man known for it's connection with nature, pale green skin, and unparalleled beauty).

The conversation was cut short by the sound of breaking twigs. Eldar appeared from the woods followed shortly by Captain Olaf. Eldar had come to hear Meth's side of the rumors he had just heard around the colony and Olaf just happened upon some of his old friends while exploring. After a brief misunderstanding pinning Chum and Olaf against each other, the questioning continued.

"Yeah, all those rumors are nonsense," Loufie said, "we're actually trying to protect the colony. There's some dangerous stuff out there and we're better equipped to deal with it. I tried to warn them, but they wouldn't listen. Now we're choosing to keep them safe by keeping them ignorant."

The group questioned further, but Loufie was hesitant to give up too much information to people that he had just met. Instead, he offered that they come with him on an exploration mission he was given by the colony. They planned to meet the next day at dawn to head out.

"Oh, and don't worry Methuselah. The people who saw you take the records are being taken care of." Loufie said as he and his crew disappeared back into the trees.

Meth, Wiggiw, Olaf, and Eldar chose to set up camp for the night on the cove. The night went smoothly until early the next morning. Meth was taking watch and heard something in the darkness. He spotted the source at the same time he himself was spotted. A Bark Treek (like an Orchid Treek but darker skinned and more hardy) began waving his arms as vines began growing out of the ground and wrapping around Meth's ankles. The others woke up and quickly took the Treek down, at which point he revealed that he was after Meth for betraying the colony. Before the Treek could say any more, Meth's self preservation got the best of him and he killed his pursuer in cold blood (for a Fate point of course).

After some awkward moments, the group packed up and went out to meet Loufie. Along with Loufie came his muscled sidekick and the beautiful Orchid Treek once again. Eldar, Meth, Olaf, and Wiggiw joined the group and headed off to a forest that had been spotted nearby. Their mission was to scout and report back with anything of value to the colony.

Along the way, Olaf and Methuselah hatched a plan to have some sort of safety net if things ever got ugly between their group and Loufie's. The two began talking to the Treek woman as she walked near the back of the group. She was a bit strange, but through their breif conversation the two discovered that her name was Sable, and she works for Loufie primarily for the good pay. 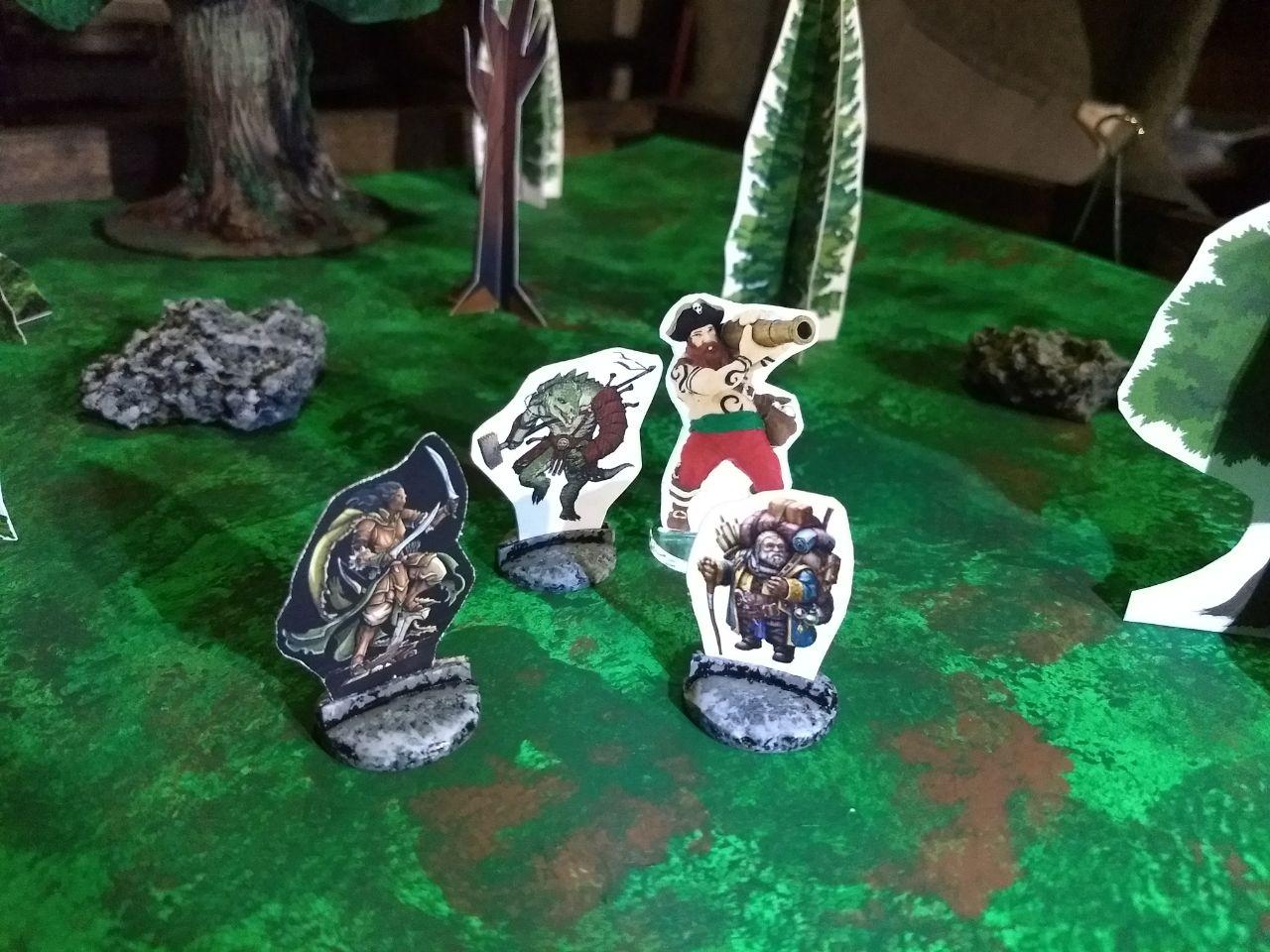 The forest quickly became a dense jungle, damp with humidity. As the group journeyed further into the wood, glowing green vines seemed to be everywhere, brighter the further the went.

"Alright, its gotta be around here somewhere. Everybody, look around for the source" Loufie shouted with a look of excitement in his eyes.

Our band of adventurers split up climbing trees, reading the forest and searching all around. They spotted something up in the trees. A bridge stretched from one to another, while a platform wrapped around another. "Up there, it's a treetop village." Olaf yelled. With a little bit more investigating the group cut a cord and rode a very old dumbwaiter up into the village.

A series of trees were connected by rickety bridges, each having a small dwelling at it's center. The two groups chose to split up to search the series of huts quicker. Loufie, Chum, and Sable went one route while the rest checked the other side.

Shortly after searching the first hut, the adventurers saw something in one of the nearby trees, a shadow darting from one to another. The group hurried to the next platform in hopes of avoiding the creature, but when Olaf was the last to cross, the creature attacked in hopes of isolating him.

A green blur dove onto the platform behind Olaf. As the giant pirate turned, he locked eyes with a dark green monster with oily skin, unnaturally long arms, and standing almost as tall as Olaf. A forest troll. The creature hesitated and then swiped at him with claws like rusty daggers. 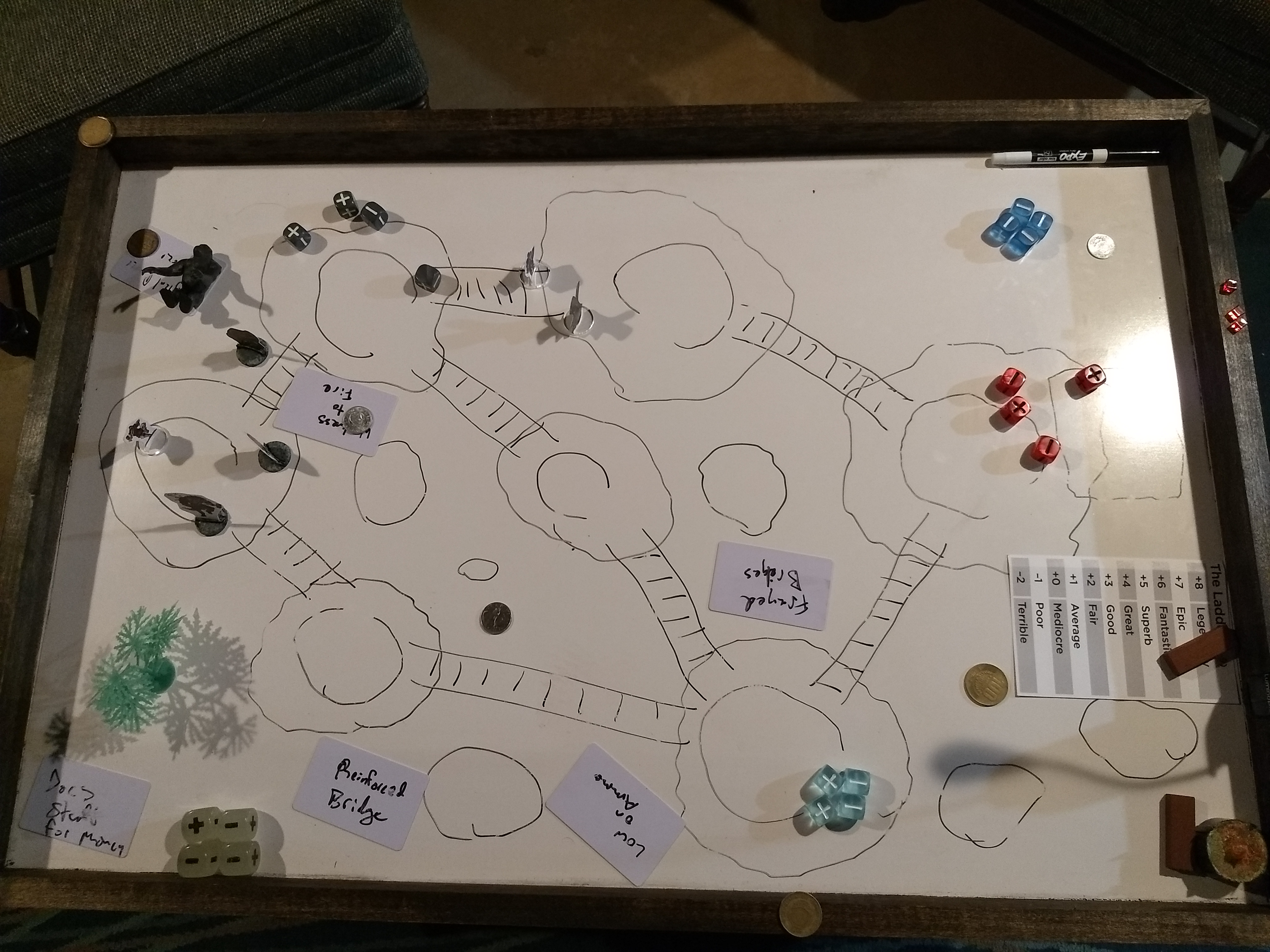 Another jumped out, attacking Loufie's group, and everyone joined in the fight. Eldar managed to chop off an arm and supposedly kill the troll, but a moment later, the creature's limb began to regrow as he stood and continued his attack.

Some stray shots hit a couple of the glowing vines running through the village, resulting in a small explosion of green energy. The energy absorbed into the wood around it, and the the wood started moving. A small bipedal twig blight clawed itself free and began attacking anything that moved. Another one broke free and charged after the troll by Olaf.

The blights went down easily enough with a solid hit, but the trolls we're proving more difficult. Wiggiw took a moment to assess the situation and realized he'd seen a troll taken out permanently before. "Fire! Light them on fire!" he called out. The first troll was then quickly covered in oil and set aflame before Olaf threw him to the forest below. The second met a similar fate with a flaming arrow but only after Sable was badly wounded by it.

With the area secured the group moved on to the final hut of the village and found the source of the pulsing green energy through the jungle. A spiral of wood and green light formed a tear drop shape at the center of the hut and reminded them of the blue glowing object they found a few days before in the spider den.

With the whole group now surrounding this artifact, Loufie's look of excitement returned to his face. He rolled up his sleeves and began to approach the item, but before he could reach it, Wiggiw reacted. In fear of another magical artifact getting into Loufie's hands, Wiggiw loosed an arrow. Before anyone could react, Ithe arrow impacted the glowing spiral and there was an explosion if green, and then white.

The adventurers hit the forest floor hard, each taking at least a minor consequence, and as their senses returned to them they could only hear the cracks and moans of trees uprooting...

This was an awesome session! The players had a blast and Wiggiw's decision to destroy the artifact at the end of the session was a huge surprise to everyone. Not to mention, it gave me tons of material for me to work with next session.

What do you think will happen as a result of Wiggiw's recklessness? What did Loufie want with that artifact? Will the adventurers escape with their lives? Find out more next time!