The adventurers started this session locked in Loufie's basement with the walls closing in on them.

Wiggiw jumped into action first, and began spurting out all of the ancient Elvish he knew, word by word. One of the words halted the walls for a split second before they started closing in once more. In the confusion, the Melonganite managed to set off one of Olaf's smoke bombs, making the whole situation worse. Meth, now starting to panic, charged headlong into the opposite wall, trying to break his way through solid stone, and Matthaias found a seem in the wall where some of the smoke was escaping. 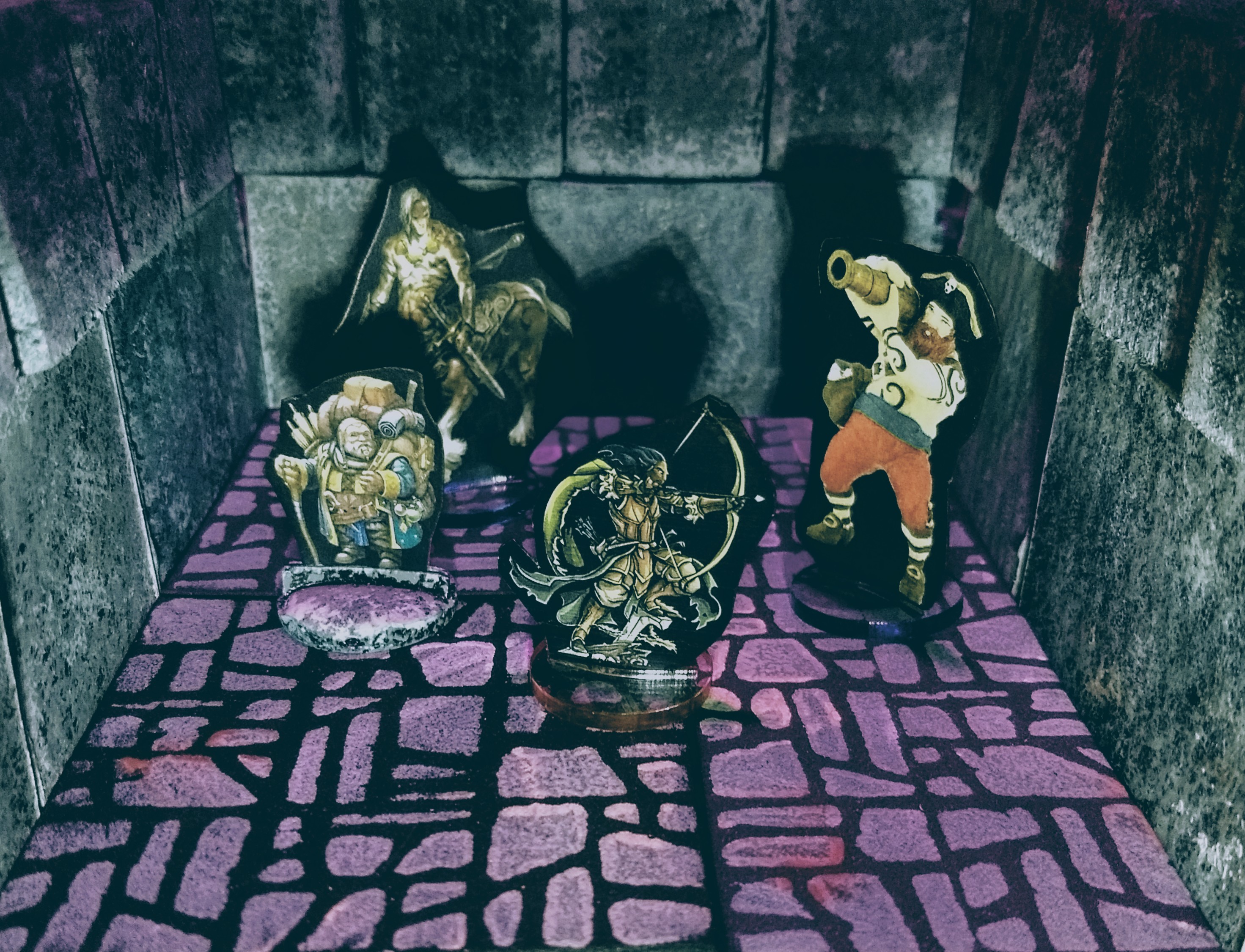 "Over here. There's a seam. It might be a door!" yelled Matthaias.

"Get back!" Olaf bellowed as he fired his cannon toward the voice of Matthaias.

The wall exploded with rubble, and as the smoke cleared, the group now saw a large underground library before them.

Creeaaaakkk. A noise came from behind as Eldar broke down the door into the basement and rejoined the group. Meeting him for the first time, Matthaias found Eldar very attractive and tried to start up a conversation. The words all managed to come out jumbled making things extremely awkward between the centaur and the lizardman.

The party ventured forward into the library. It was old and mostly covered in a thick layer of dust. At the far end was an ancient-looking archway tinted slightly blue, seemingly for whatever it was used for. A brazier of magical fire lit the room when they entered and revealed a catwalk above with more bookshelves lining it.

The group quickly began searching around. Wiggiw scoured the shelves for something on magic, and while he did find something, it happened to be a book about all of the most vile and obscene ways magic has been used. Meth searched frantically for something valuable and ended up activating a sunlight spell in one of the books, blinding himself temporarily.

Wiggiw did eventually find something of use. In another book on the history of powerful magic users. He found a section about a sorcerer who was experimenting with teleportation magic. Included was and illustration of the sorcerer's study and it looked exactly like the lair where they ran into the teleporting spider about a week earlier.

While everyone was flipping through ancient tomes, Olaf decided to check out the archway at the far end of the room. The library ended with a large crevasse in the floor. A stairway stretched across it and led to a rough hewn rock with the archway sitting at its center. As he studied it, the archway flickered with blue light and then, a portal activated inside it.

His gut reaction was to jump through it, but he suppressed the urge and instead threw a bomb in and ran down to the library for cover.

Moments later, a dragonborn named Dreki, a turtoid named Tork, and two elves named Perion and Vaox, stepped through the portal. The group had seen Vaox with Loufie before they set out for the jungle. He now wore a scowl on his face.

"What the hell are you doing throwing bombs at us?" Vaox growled.

Olaf responded unapologetic, "I didn't know what that thing was."

"You're under Loufie's house. And what are you doing to Simeon? I thought you were with us" Voax said as he gestured toward the elf that Olaf still held hostage. The same blue energy that powered the portal began to arc between Voax's open palms.

"I wouldn't do that if I were you!" responded Olaf, holding Simeon over the edge of the pit that separated the two groups.

"I guess that's the price I'll have to pay" Vaox hissed as he jumped into action. The scream of Simeon falling to his death rang out, signaling the start of battle.

Vaox vanished and then reappeared next to Olaf, trying to create a distraction for his friend. Then Tork jumped down as well and stood in a ready position for whatever Olaf threw at them.

Vaox yelled up to the Elf by the portal, "Perion. Now!" Perion waved his hands and large chunk of rock pulled free from the floor beneath him and launched straight at Olaf. He rolled out of the way but got scraped up in the fray. 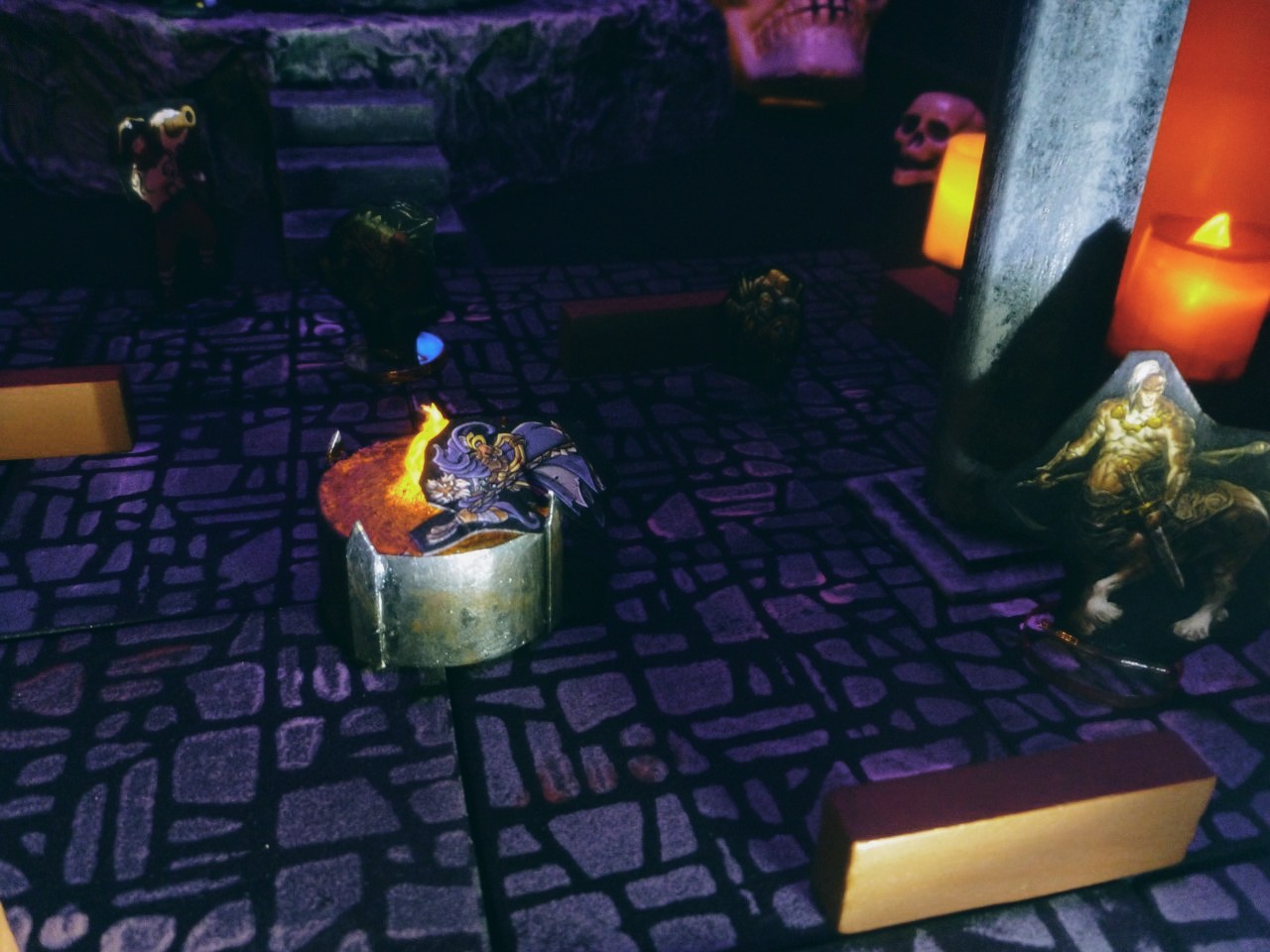 Dreki's wings unfurled as he flew onto the catwalk where Wiggiw was. He took a deep breath and then spewed fire at the catwalk. Wiggiw was unable to maintain his footing and fell to the floor below, fracturing his tail bone. Meth followed up with an illusionary duplicate to draw the enemies fire while Matthaias discovered some pinkish glowing veins on Tork and Dreki's heads. He came to the conclusion that their actions weren't entirely their own.

The fight raged on until Matthaias (using all of his fate points on a single shot) pierced the teleporter's chest with an arrow, causing him to fall from the catwalk into the lit brazier below. At that, Perion, the earth mage, gave orders for Dreki and Tork to take on the rest of the group while he conceded back through the portal.

Realizing what was going on, the group worked together to snap Dreki and Tork out of whatever mind magic was enslaving them. Through a book Wiggiw had picked up, they discovered that reminding them of their past selves may be enough to break the spell. Olaf, being so talented at reading people, managed to pick up a few minor details about each of the opponents and end the fight quickly. 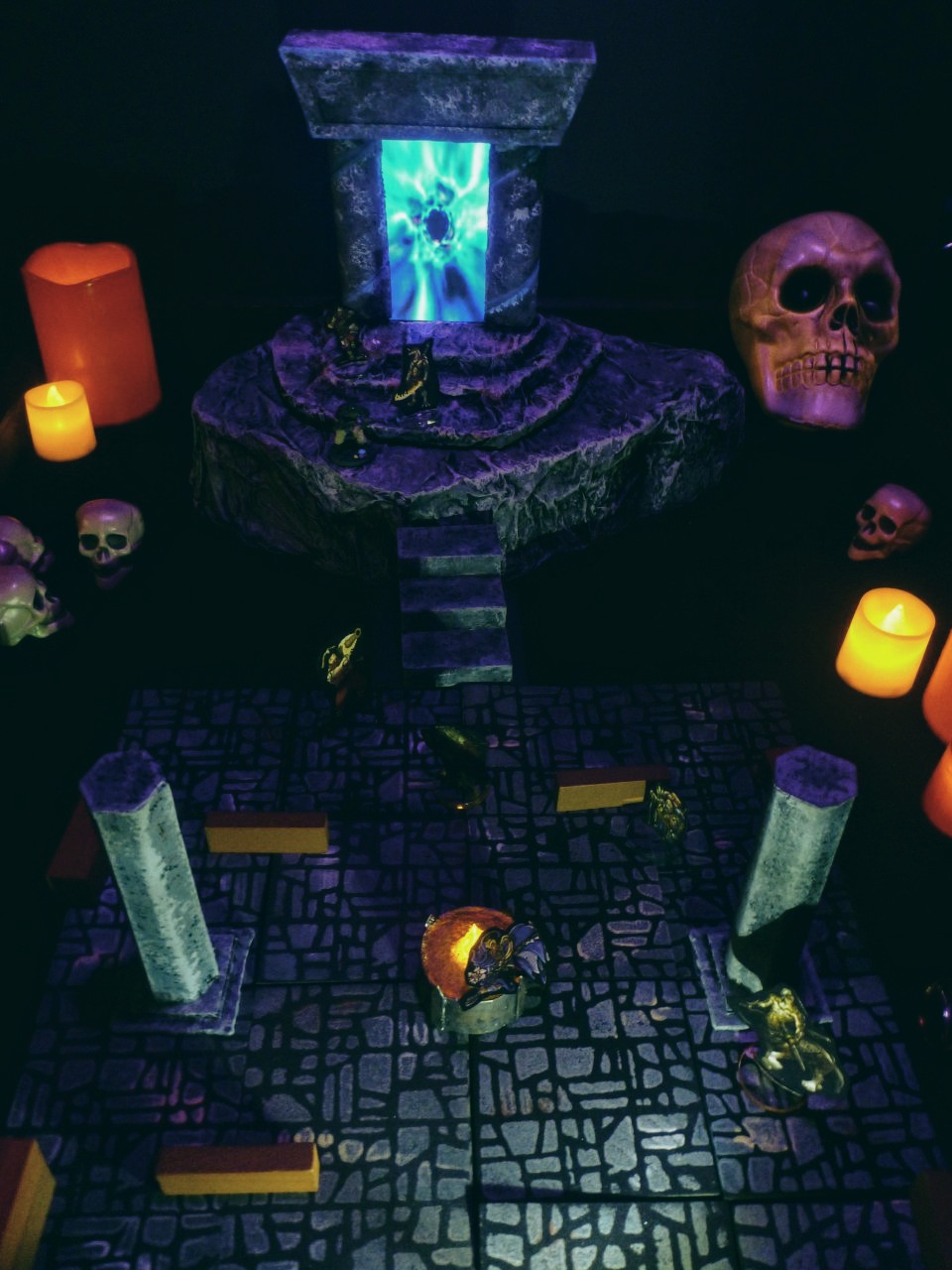 The group questioned Tork and Dreki and discovered that they were both part of the first colony of Daegal. They both also knew Loufie, who helped them build the colony. The party wanted to know more, but their recovering minds were to foggy to gather any significant details.

With a moment to patch themselves up and pull the teleportation gem from the burnt corpse of Vaox, they managed to activate the portal and step through, only to see Perion running toward a shambling group of humanoid figures. In the landscape behind him stood a ruin of a castle.

So this was my first game ever with six PCs (Dreki was a new player), and it was a ton of fun, but things did move a lot slower than usual. We were only about halfway through what I had planned for when we decided to call it a night. It was partially due to adding new players, and partially due to a slow start. Everyone did have fun though, so we'll try it again if everyone is available. However, I don't think I'd want to do more than six, especially in a conflict.

Other than that, things went pretty well. I had planned to have Vaox concede too, but Matthaias dropping all of his fate points caught me off guard and led to Vaox's early demise. Oh well, there's always more bad guys where he came from!

The craft for this session went over really well too. I made it so that it just looks like a basic archway when it's deactivated. So when it was activated, I pulled up a portal gif on my phone and slid my phone into the arch. There was a chorus of "Woah!" as soon as I activated it. That alone made it with the time to make it!

Where is Perion fleeing to? What other truths might Dreki and Tork uncover as the continue to shake off the mind control? Find out next time on The Daegal Legends!