"Conick has been attacked!" The group watched as one guard yelled the news to another.

"I know." The other guard at the top of the pallisade responded. "You're just hearing about this now? He was attacked by a giant boar while he was outside the colony walls. He's recovering now."

"Oh, I uhh, just wanted to make sure you were aware." said the first gaurd. 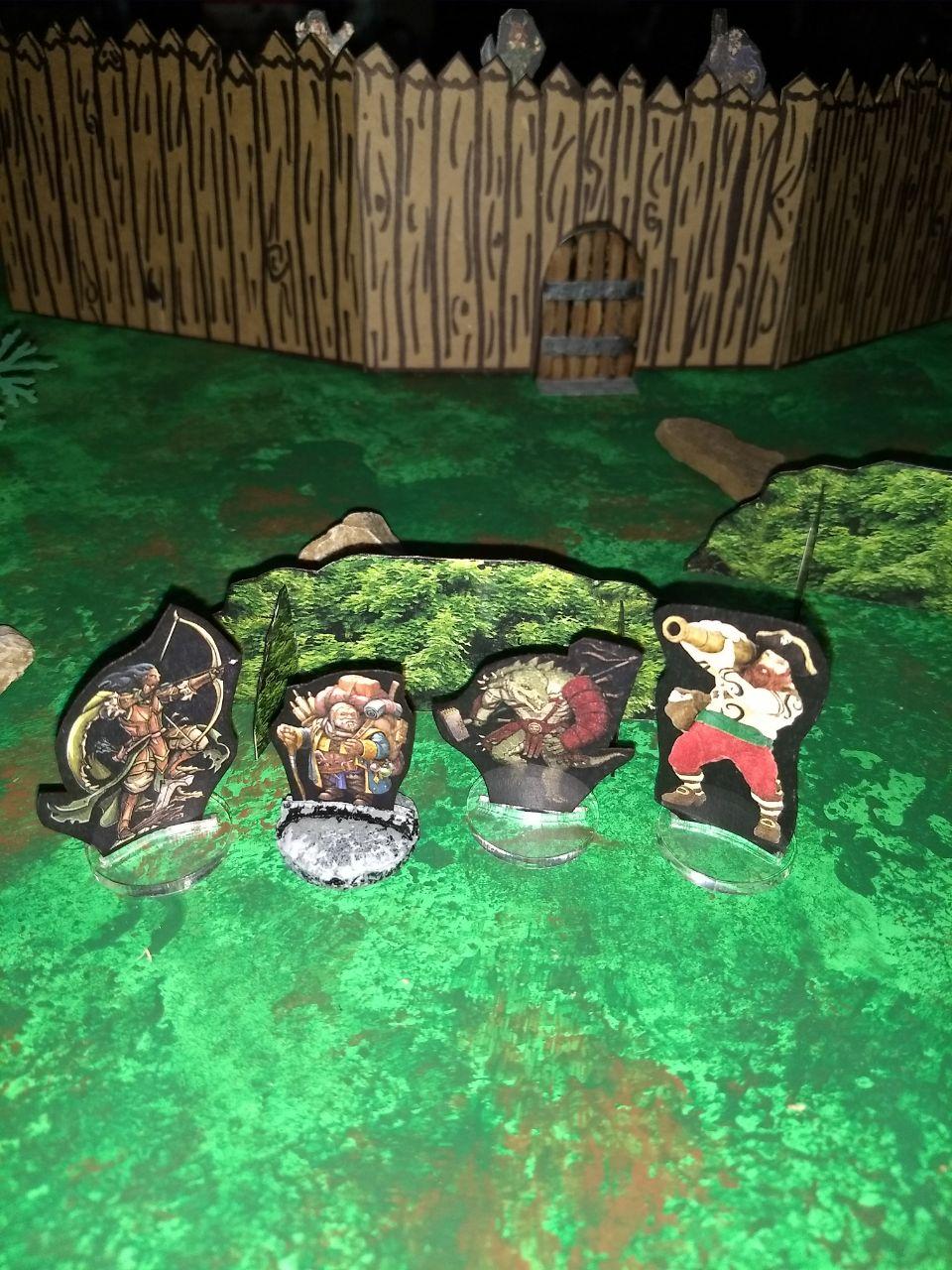 Eldar, Wiggiw, Methuselah, and Olaf hid out of sight in the bushes outside of the colony surprised to hear that Conick was okay after Loufie said he was "taken care of." The sun was just starting to peak over the horizon signalling the start of a new day. Assuming that Methuselah was a wanted dwarf in the colony, the group tried to decide on some sort of plan other than just walking in. Then they heard someone pass by them heading towards the colony.

A centaur trodded down the path, with very little on him by means of equipment (he was a new player since Eldar's player couldn't make it that night). The group approached, hoping that he could be their alibi. After mistakenly provoking Olaf's rage by calling him a giant, the centaur was willing to ablidge. Though he was a little skeptical.

"My name is Matthaias. I'm here on Daegal to find someone who has ties to Loufie. So yes, I'll help." the centaur explained.

Meth however, had already grown bored of the conversation and approached the wall. Being the shifty guy that he is, he was able to convince the guard closest to the door that his name was Kevin and he had just gone out to gather berries (via One Person, Many Faces). The guard had the gates opened and the group was free to walk in. The strange thing was though, no one else seemed to recognize Meth despite only convincing one person that he wasn't himself. It was as if Conick had never told anyone about him stealing the records. 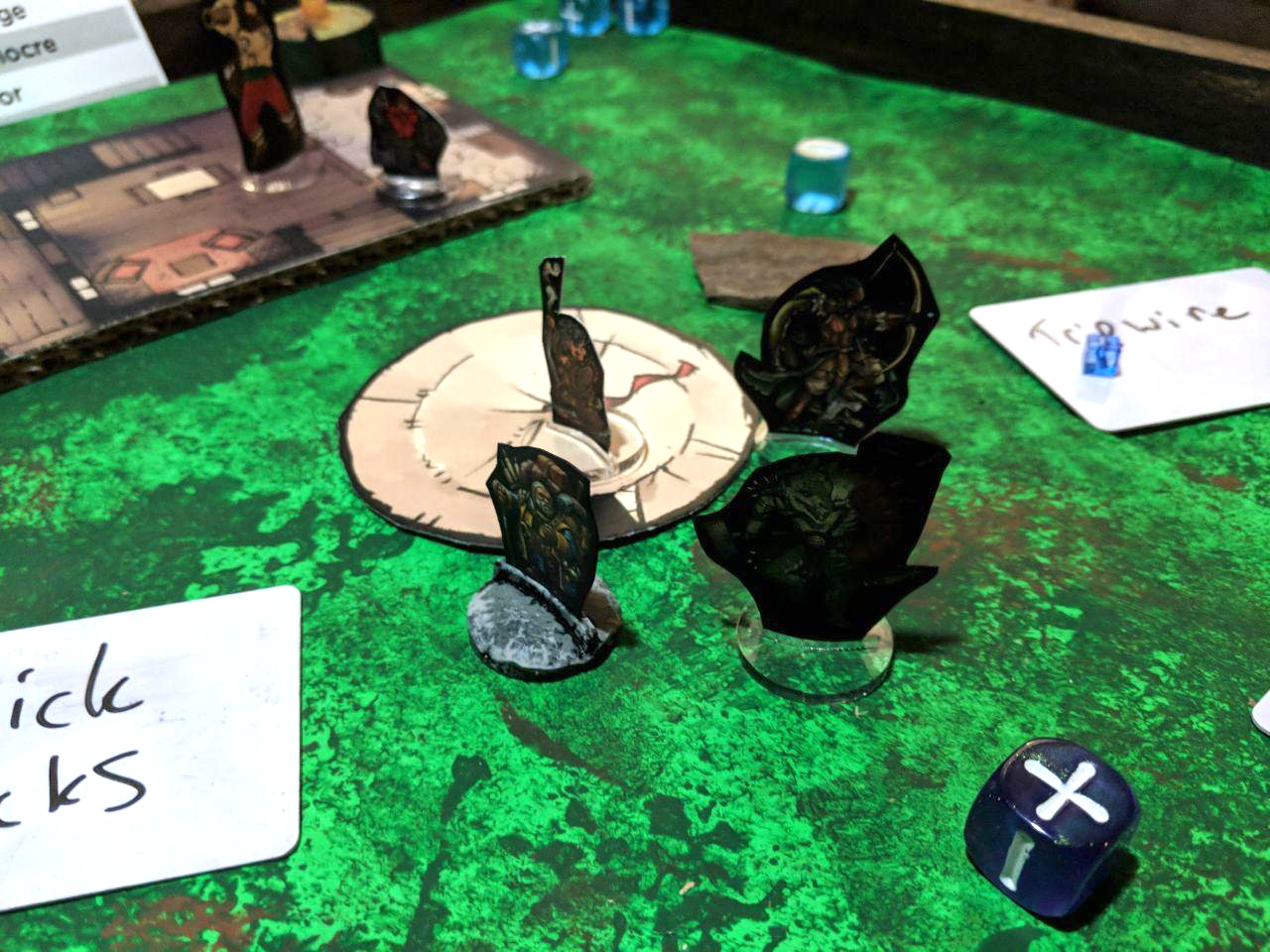 The group walked into town and headed over to Ethel's hut, an old apothecary that had previously been the medic on one of Olaf's ships. She agreed to heal up the crew, but it took the better part of the day to do it.

While she was working on the others, Olaf and Matthaias went off to The Lodge, where Meth had previously stolen the documents and where Conick was presumably healing up. They hoped to find some kind of hint as to where Loufie lived. The two towering adventurers were greeted by a small dwarf with a red beard and a thick accent. "The name's Daryl, how can I help you?" he said. 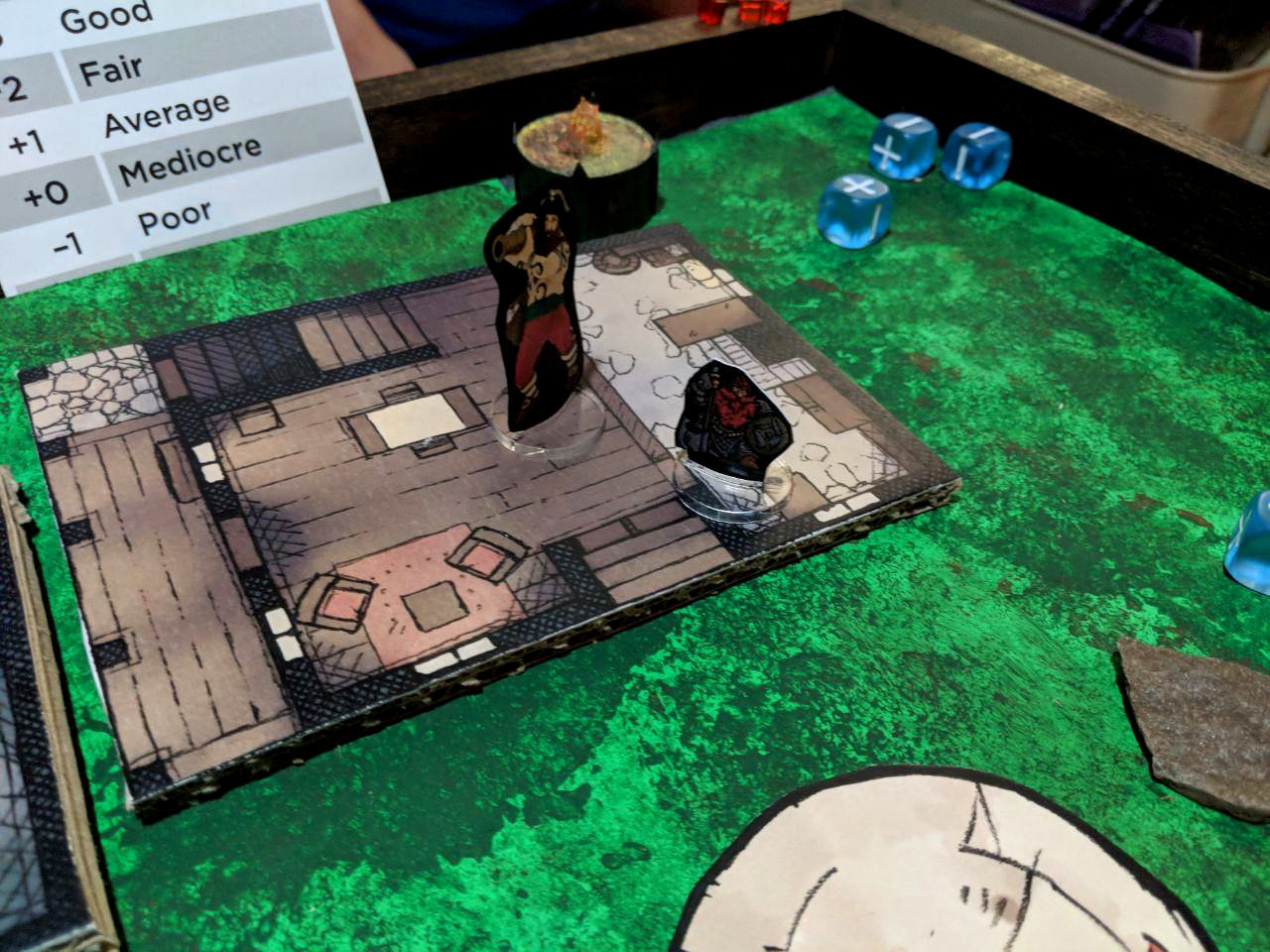 Daryl invited them in and the two quickly got him talking so that Matthaias could sneak away. Olaf discovered that Daryl wasn't very fond of his job to babysit Conick and kept the conversation going while Matthaias headed to the basement where there were some records of the settlement.

While Matthaias searched, strange things were happening back at Ethel's tent. Ethel was still part way through correcting Wiggiw's neck when they saw a suspicious hooded figure walk by. Ten minutes later, the same figure walked by again, and again after another few minutes. Meth had previously cloaked the tent in an illusion so that people outside the tent couldnt see them, but Eldar stepped out of the see tent to see if he could get a better idea of what was going on. One more time, the figure walked by, a little further away this time, looked at Eldar, and then walked away. The hooded figure was a Bark Treek.

Back at the lodge, Matthaias had finally found a document detailing where Loufie originally made camp, and he found an unwelcome visiter hiding in the basement waiting for him. Another hooded Bark Treek now had a blade to Matthaias's throat and whispered, "Where's the dwarf?" 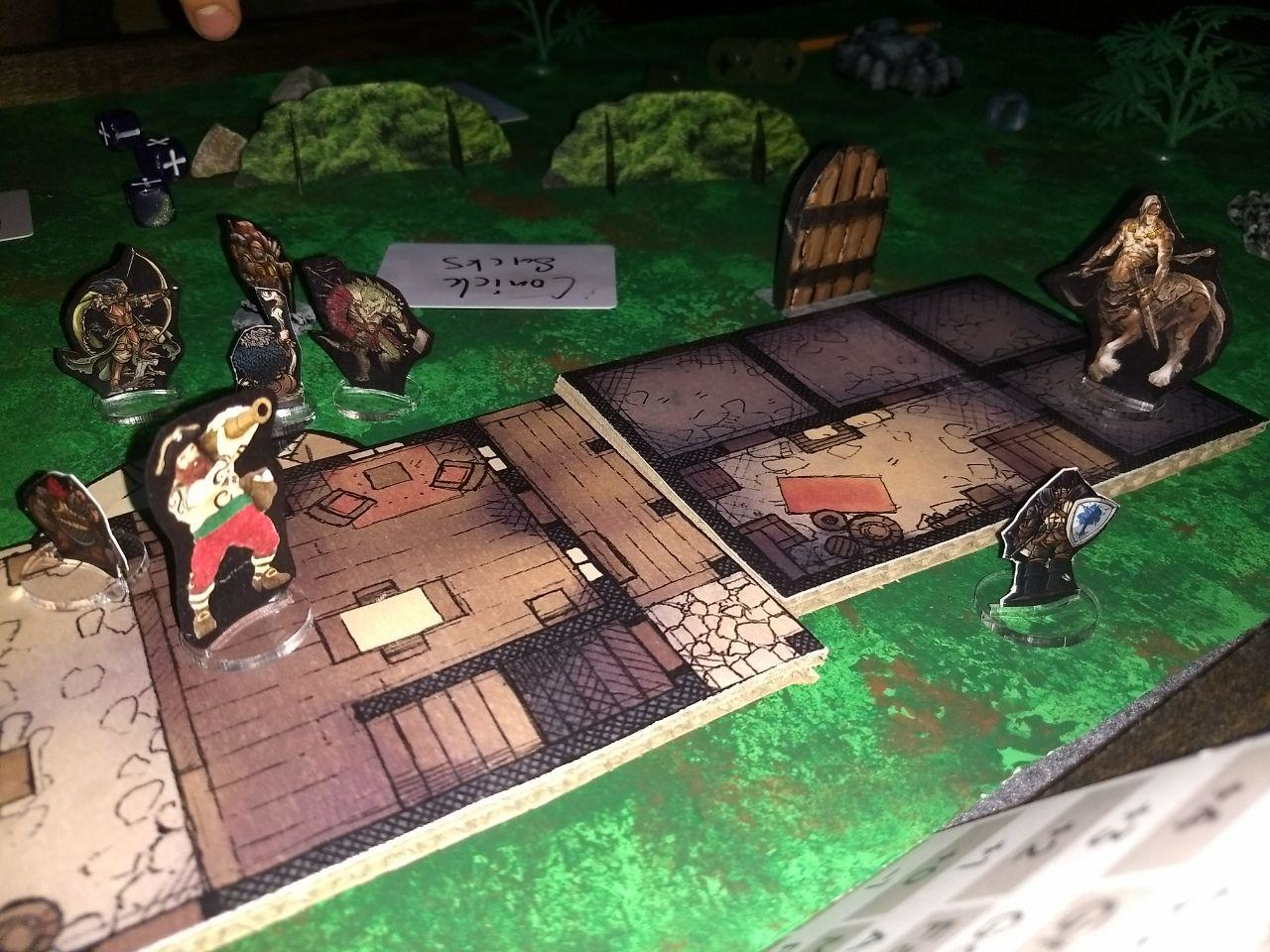 Unsure of who the Treek wanted, Matthaias responded, "He's upstairs." but it only made the Treek more angry, pushing the blade harder against the centaur's neck.

But instead of answering, Matthaias responded with a blade of his own and a scuffle began. Hearing the commotion, Olaf ran to the stairs and tried taking a shot at the assassin that was now cornered in the basement, but the Treek managed to slip away in the chaos.

After some excuses we're given to Daryl the two headed back to Ethel's tent to find their friends now on their way toward recovering from their various injuries. Eldar had some things he needed to grab while they were in town and headed off on his own. The rest of the group headed over to Loufie's house.

Being a fairly new settlement, most people still lived in tents. Only the wealthiest or the people who had been their the longest had actual houses, and Loufie seemed to be one of those people. They approached the house and did a quick scan of it. No one was outside and there was one elf inside that seemed to be magically controlling a suit of armor.

The group quickly formed a plan and tossed the dwarf (Meth) onto the roof so that he could climb in on the second floor. He crawled through the window into what seemed to be Loufie's room, except the place was pretty baren. No clothes, no personal belongings. Just a makeshift wooden bed.

Hearing Meth enter the room, the elf downstairs sent his suit of armor upstairs to check it out. Just when the armor found Meth, Olaf led the rest of the group through the front by kicking it so hard that the Elf pooped his pants out of fear. A fight broke out where no one actually landed a hit on each other and it was ended when Olaf (using his Wrestlemania stunt) grabbed the elf and folded him up like a pretzel.

Scared out of his mind, the now very smelly elf began to give some answers. "Look, I don't know much. I'm a new guy around here. All I know is they come and go a lot from the basement. Oh, I probably shouldn't have said that."

So, Olaf, Wiggiw, Matthaias, and Meth headed down to the basement and found an empty room made of stone. Matthaias did some searching around and discovered that it was actually used as some kind of hallway to another room, but no one saw any doors aside from the one they came in through. Then, with his vision impaired by the elf he still carried on his chest, Olaf heard a click under his feet. A metal door slammed shut behind them and they could hear a clinking chain-like mechanism activate in two opposite walls.

This session was a bit slower than the previous two as a result of it all being in town, but we all still had a lot of fun. It was a good chance for us to see how the group reacts to more social oriented situations and to set up some threats for later on. Plus, I think it turned out to be a pretty good intro session for Matthaias. We definitely missed having Eldar with us, but hopefully we can get him back soon!

What mysteries lurk in Loufie's basement? How long will Olaf maintain his grapple on the poor elf who pooped himself? Find out next time on The Daegal Legends!