Previously, our band of adventurers left off just after walking through an active portal to catch the last of the Melonganites that attacked them. The group found themselves in the middle of a plain. Ahead of them, they could see Perion, running toward a sea of shambling humanoid figures patrolling the outer wall of a ruined city. The party chased after him and quickly discovered the mass to be an army of zombies and skeletons, patrolling the exterior walls of a ruined city. Beneath their decaying feet, pulsing reddish-green veins stretched across the field, the brightest of which were closest to the castle looming in the distance. 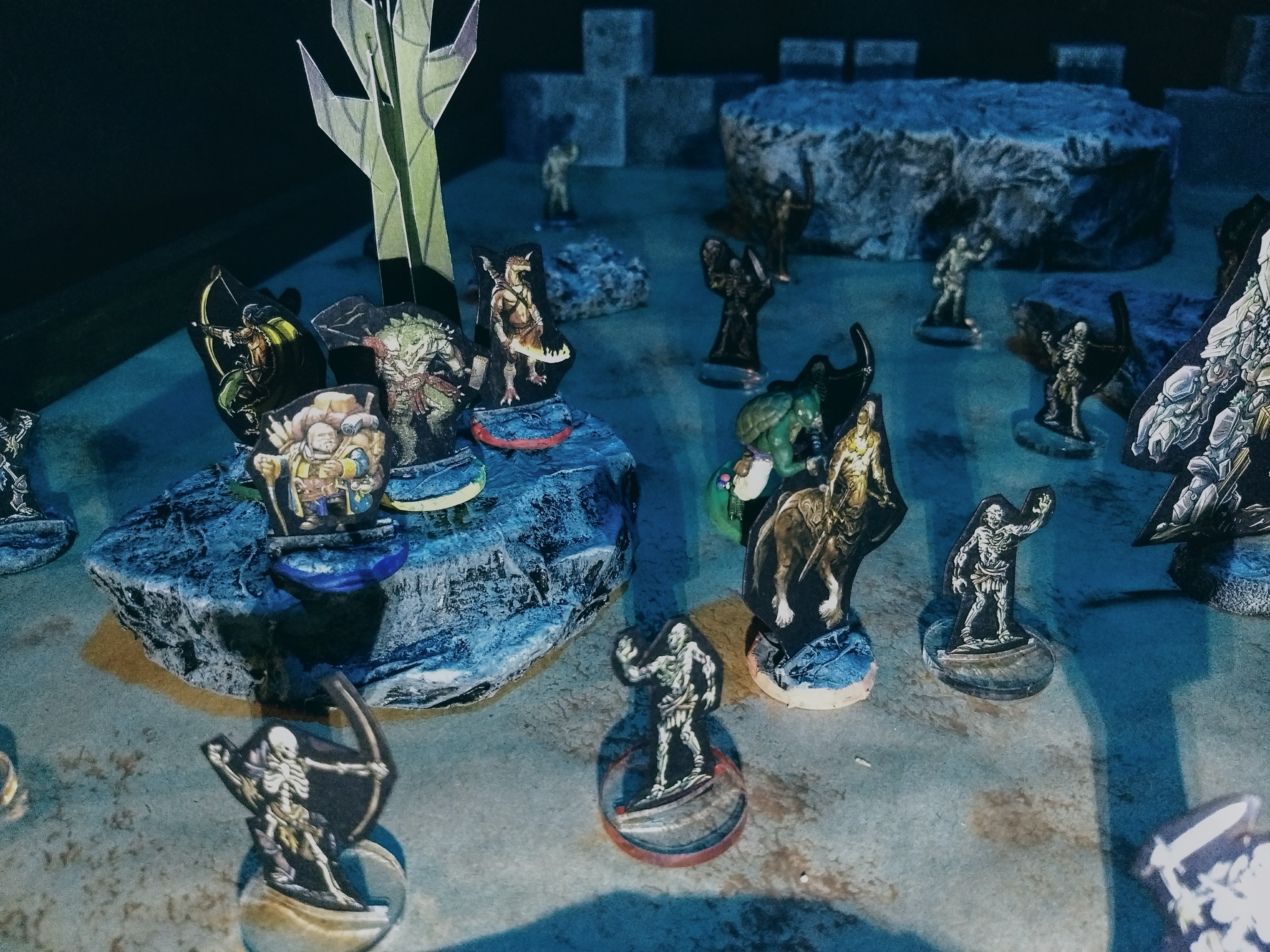 Perion, having a head start, smashed through a few of the creatures and climbed up onto a rock outcropping. He prepared a spell and then a pillar of stone launched him over the hoard and onto another rock closer to the city.

The adventurers followed suit each with their own attempt at closing the distance. Dreki flew up to survey the field, while Olaf crafted a bomb mid run. Wiggiw observed the undead monsters and discovered their complete lack of intelligence. As a result of Meth's magical plant growth that he received from the thrashing twig blights, he tried to use some kind of nature magic and summoned a small army of grass pygmies to distract the undead. The group used all of these findings to help them advance while Matthaias fired an arrow at Perion, but failed to take him down.

The group charged forward, smashing zombies and trying pin Perion down, but with the aid of his companion earth golem, now turned grave golem, the party was unable to stop him. 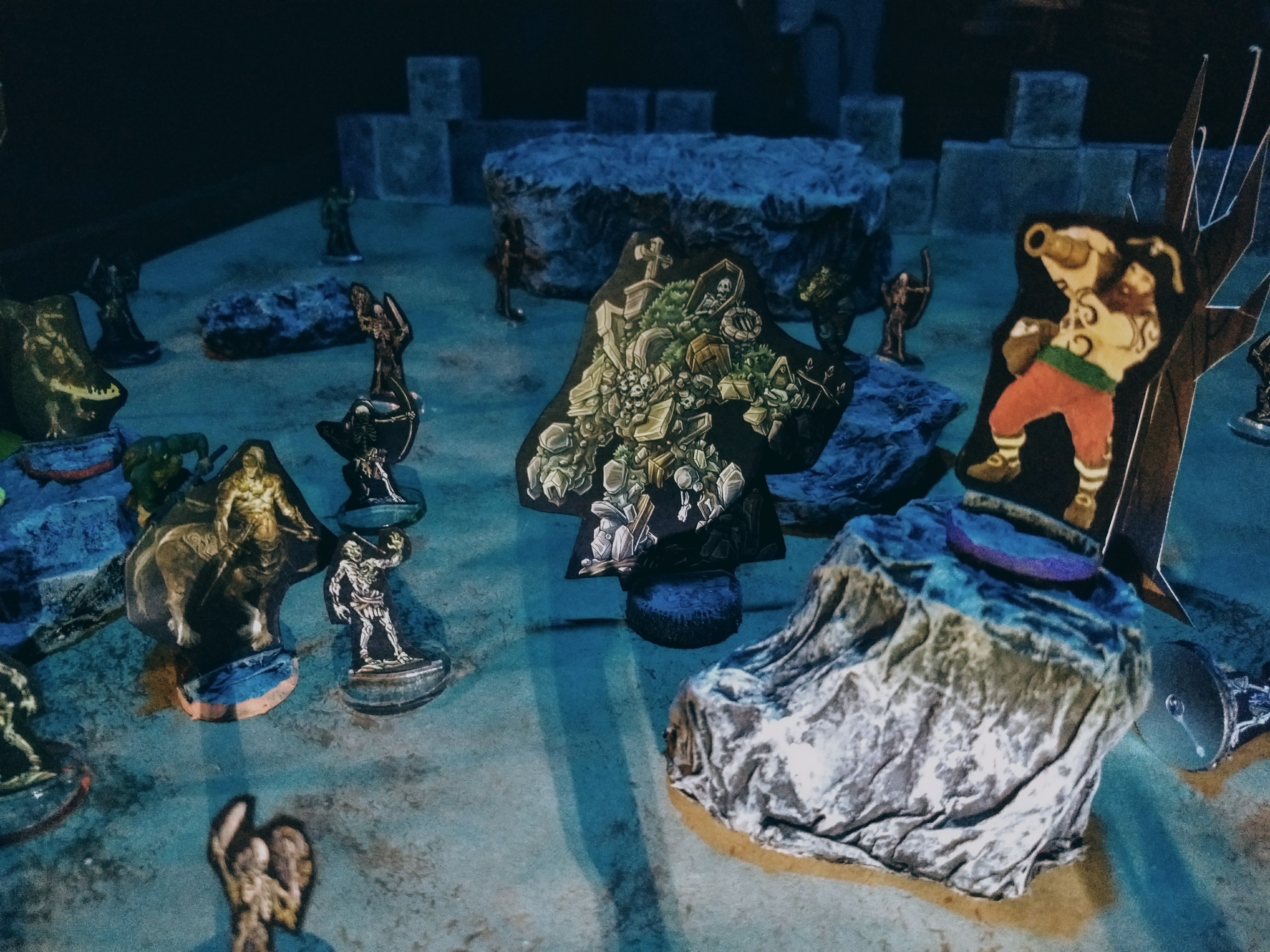 Perion disappeared behind the wall of the city with a final rock jump. After a slight mishap due to the a short-fused bomb that Olaf slapped together earlier and a zombie stealing Wiggiw's pants, everyone made it over the wall and out of the sea of zombies.

As they entered the ruined city, the group could make out Perion entering the front doors of the castle, where the reddish-green veins were the brightest. 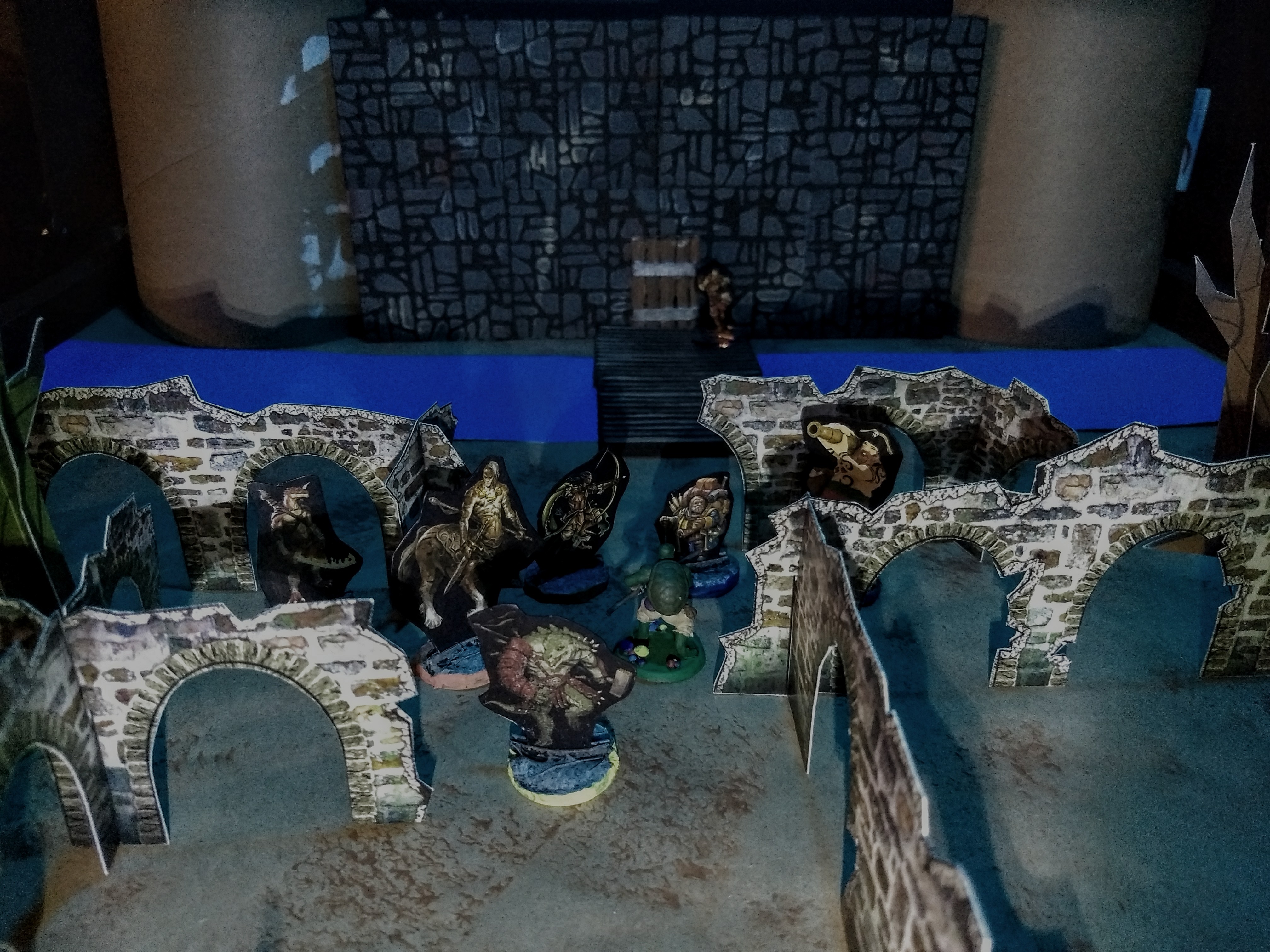 Wiggiw took a look around and realized he knew this city. Not only that, but he had been to it before. This was the city of Viltella, a once prospering city that was wiped out overnight by some sort of zombie plague. The group walked passed a church with empty graves outside, no doubt supplying the outer wall with its undead security system. Unafraid of making himself known, Olaf decided to blow up the church before the group headed over to the castle.

When they arrived at the castle, the adventurers huddled in a ruined house nearby to figure out their game plan. Perion had just entered and the group could see figures on the widows of the structure. Dreki tried dropping one of Olaf's bombs on the castle roof, but only managed to draw the attention of the archers on the castle's watchtowers. Matthaias tried sneaking across the draw bridge to the front door, but was also met with arrows. The group then decided to sneak into the moat and brave the sewers below the castle, but just as they entered, they realized Wiggiw wasn't with them. He stood on the drawbridge, walked right up to the front door and knocked on it. 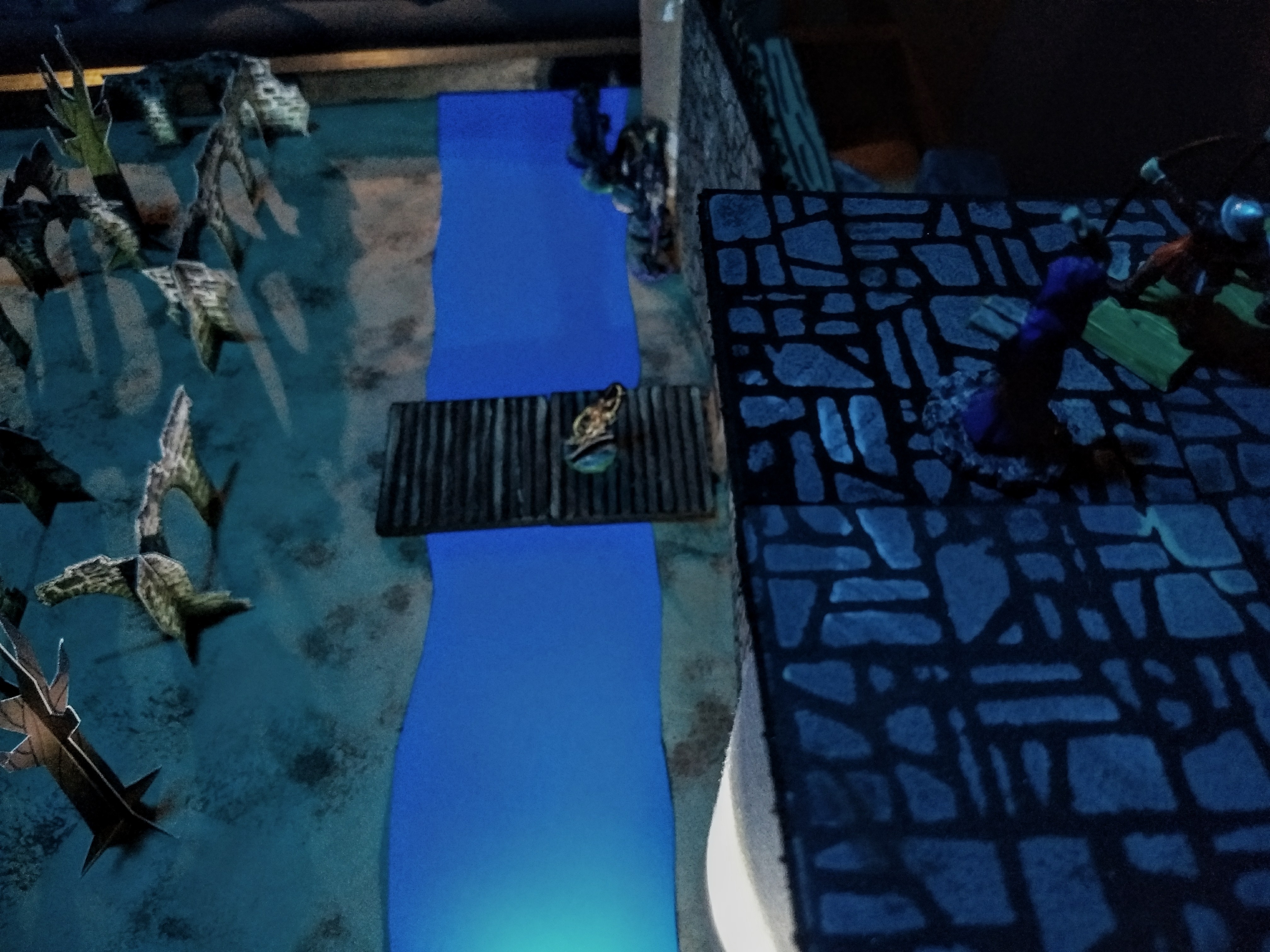 "Give me one good reason not to shoot you down where you stand!" shouted one of the archers on the tower.

"I just want to learn what you're doing here." Wiggiw responded.

There must have been something to the way Wiggiw spoke or maybe the way he looked, because the guard said "Don't move a muscle!" and disappeared into the castle.

Moments later, the hooded figure that Wiggiw and Meth ran into in the phase spider cave stepped out at the top of the tower. "Hello father. So good to see you again." came a female voice. She lowered her hood.

"Allendria. What are you doing here?" Wiggiw said amazed. "Look I just want to find Loufie and figure out what's going on."

"You killed 3 of ours, tried to kill a fourth, and now you come here in peace? I don't think so." Allendria's voice was cold but confident.

"We we're defending ourselves. I just want to learn more." Pleaded Wiggiw.

"Bull shit!" said a familiar voice from the opposite tower. It was Loufie, with Chum by his side. No sign of Sable. Unwilling to hear anymore, Loufie continued. "Take him down" he yelled to the other tower.

Allendria eyes sparked with pink energy and Wiggiw was overcome with a piercing pain in his head. He collapsed in a heap on the drawbridge.

The guards began opening the front doors to grab an unconscious Wiggiw, but Olaf, having watched the whole thing, could not just sit back while his friend was captured. He jumped out of the sewer drain and charged the bridge. The guards swarmed Olaf, and the furious half giant fought back, breaking jaws and tossing guards, but their were too many. Before the guards took him down, Olaf used his last bit of strength to knock Wiggiw into the moat where he was pulled into the sewers by the rest of the group. Olaf was dragged through the castle doors as the remaining adventurers climbed further into the sewers to regroup and lick their wounds.

This session turned out to be a lot of fun, but i did make couple mistakes along the way. First off, I ran the chase through the zombie army as a conflict from the start. After taking some time to think about it, I think a contest would have made much more sense. Running it as a conflict resulted in a loss of tension and made some of the movement a little wishy-washy.

Second, I had Perion concede from that conflict before Matthaias dumped all of his Fate points into shooting him (just like he did to Vaox in the previous session), but I forgot to negotiate with the players on how that actually plays out. So, I plan to open up that discussion at the beginning of the next game.

That being said, tons of fun was still had. The sea of undead made for a very interesting chase, and Wiggiw's self compel that lead him to the front door of the castle followed up by Olaf's self compel to save him made for an extremely cinematic moment. We were all talking about it for days afterward and we can't wait for the next game!

What fate will Olaf face as a prisoner of the Melonganites? How will the adventurers infiltrate a castle that's ready for their arrival? Find out next time on The Daegal Legends!